This past Saturday October 17 the Carson & Colorado Railway held their 5th annual BBQ-fundraiser at the American Legion Hall in Independence.  The event was huge success with a standing room only crowd of over 140 turning out to show their support and to enjoy a delicious tri tip dinner cooked “trash can style”. 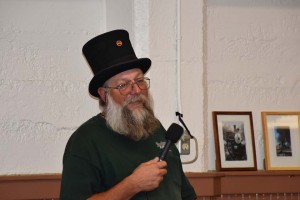 The Carson & Colorado Railway is an all volunteer 501(c)3 non-profit group dedicated to the restoration, and eventual operation of Southern Pacific narrow gauge locomotive #18, as a living reminder of the proud history of Independence and Southern Inyo County.  Locomotive # 18 is also known affectionately as the Slim Princess. 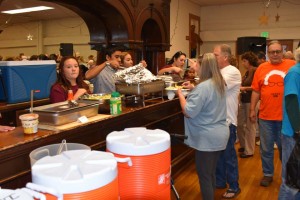 The restoration project got its official start in 2010 when volunteers from the Owens Valley, and several steam locomotive organizations throughout the west came together to begin the process of putting locomotive #18, which had been on display at Dehy (day-hee) park in Independence since the 1950s, back to operational order.

Board President Dave Mull updated the attendees with the current status of the restoration project.  Mull spoke of how a milestone was recently achieved on August 21 with the firing up of the boiler and bringing #18 under steam for the first time since 1954.  According to Mull, “Everything went exactly as planned with no issues or problems what so ever. We brought the engine up to 157 psi and although we still have plenty of work ahead to fully complete the restoration, we are past one of the biggest hurdles. The #18 can now once again be classified amongst the living steam locomotives of the world.” 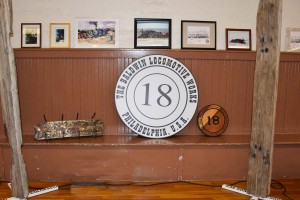 Mull went on that work on the restoration would continue with a planned completion date sometime in 2016.  Mull then spoke as to even though work on the Slim Princess is in it’s a final stages, another new project is now needing to get started and that is construction of a railroad barn to house the Owens Valley landmark once restoration is complete.

Plans are to move the restored Slim Princess from Dehy Park to the Eastern California Museum where it will be on display.  The railroad barn will help to keep the engine out of the elements and protected from deterioration.  The Carson & Colorado group plans to place 1500’ of track at the museum and bring the restored locomotive out to run on special occasions. 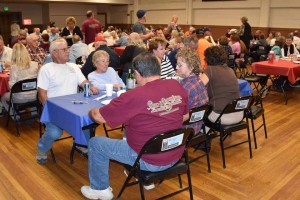 According to Mull, the railroad barn will cost in the neighborhood of $120,000 to $160,000.  “We have about $40,000 for the construction of the barn,” said Mull.  “The community has already been very generous with their support in the restoration of Engine 18.  We are hopeful the community and our supporters will help us in securing the balance of the funds needed to complete this project with the construction of the railroad barn.”

The Carson & Colorado’s Vice president Randy Babcock then spoke to the crowd how the restoration project has been completely funded with private money and that no government money has been spent.  Babcock pointed out that many of the volunteers that work on the restoration come from all over the west and pay their own expenses to do so.  Babcock himself is from the Durango & Silverton Railroad in Colorado and makes several trips a year to Independence to help work on the Slim Princess.

The delicious tri-tip meal was accompanied by a raffle with many great items making up the prizes including a couple of railroad ties from the original Owens Valley rail line.

Mull concluded the evening by thanking the crowd and reminding everyone of the important difference individuals and groups can make in small communities such as Independence and the Owens Valley.  Mull pointed out that if it weren’t for the hard work and efforts of longtime Owens Valley residents OK and Anna Kelly, the Slim Princess would have ended up on the scrap heap  instead of being brought to Dehy Park in Independence back in 1954.  During their lives, the Kellys were instrumental in affecting a number of improvements that benefited their community in the Owens Valley.

For more information on the Carson & Colorado Railway and their restoration project, you can visit their website at http://carsoncolorado.com/

I always enjoyed seeing Engine 18 when driving past Dehy Park. Kudos to those who took on the task of restoring her. Best of luck you and I look forward to seeing her again in the future.