By News Staff on September 11, 2019 in General Misc. Stories

The Carson & Colorado Railway finally got to Colorado.

The famed narrow gauge line originally ran from Mound House, Nevada, to Keeler, California, on the shores of the Owens Lake, making the “Colorado” in the name more of a dream than a real destination. 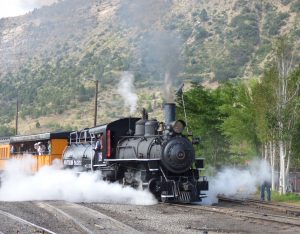 The Slim Princess Southern Pacific Locomotive #18 steams out of the Durango, Colo., train station on Aug. 23 pulling three passenger cars on the 45 mile trip to Silverton, Colo. The locomotive, whose home is at the Eastern California Museum, in Independence, has been on loan to the Durango Silverton Narrow Gauge Railroad this summer. The locomotive made two runs to Silverton, which accommodated a total of more than 150 supporters and volunteers who spearheaded the multi-year effort by the non-profit Carson & Colorado Railroad Company to restore the locomotive/All photos courtesy of Eastern California Museum

The two excursion passenger trains were pulled by the restored Southern Pacific Engine #18, which the Carson & Colorado volunteers had worked on for 10 years to get it back in running shape. The rail fans got a ride from Durango to Silverton and back as one way to say “thank you” for their ongoing support of the locomotive restoration effort. 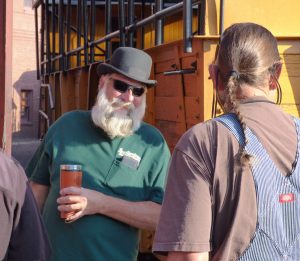 Dave Mull, of Independence and president of the non-profit Carson & Colorado Railway, the group that spent years restoring #18 to operating condition, greets supporters before they board the special train pulled by #18 on a run from Durango to Silverton.

The Slim Princess #18 was one of the last oil-fired, steam locomotives to run on the former Carson & Colorado line, and spent its working life tooling between Laws and Keeler, with multiple stops in between. The engine was retired in favor of a diesel engine in the 1950s. It was parked as a static display in Dehy Park in Independence. Its “sister” Princess, SP #9 was installed at Laws Railroad Museum, where it remains a prime attraction.

About 20 years ago local volunteers started nosing around the #18 engine and decided to get it running again. The effort to restore the locomotive over the years took a serious commitment from the volunteers and extensive support and encouragement from Owens Valley restoration supporters and rail and steam enthusiasts from across California, Nevada and Colorado. Many of those supporters were in the two groups enjoying the success of that effort by riding in a train pulled by the Slim Princess. 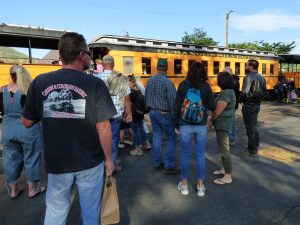 Craig Leck, of Independence, sporting the Carson & Colorado t-shirt, watches as passengers load onto train cars at the Durango train station. Leck was among the supporters and volunteers who enjoyed the Slim Princess powered run from Durango to Silverton.

That restoration effort is an incredible story in itself, and it is told with the help of nearly 100 photos in the recently released book, “SP Narrow Gauge #18 Steams Anew!” by Randy Babcock, who played a critical role in  the volunteer mechanical effort. Babcock is the Chief Mechanical Officer of the Durango & Silverton Narrow Gauge Railroad. (The book is available at local bookstores for $19.99 or can be ordered by calling the Eastern California Museum, 760-878-0258.)

Once the locomotive was operational, the Carson & Colorado and Durango & Silverton joined forces to have the engine run on the Colorado line. The Durango & Silverton runs trains year-round, and carries about 200,000 passengers a year. The primary run is to the former mining camp of Silverton, about 45 miles from Durango and in the heart of the scenic San Juan Mountains. Trains have been making that trip since 1881. 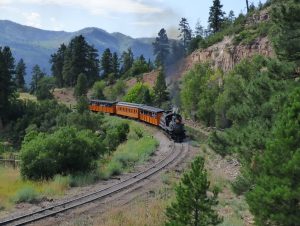 The Slim Princess #18 pulls three passenger cars up the steady grade through the San Juan Mountains on the trip from Durango to Silverton, Colo.

The Carson & Colorado group, headed by Dave Mull of Independence, wanted to see #18 run on open track, and also operate in a place where skilled mechanics and a full locomotive maintenance and repair shop were available to keep the 1911 locomotive in running order. The Durango & Silverton Railway has been working to diversify its stable of coal-burning engines. Under the direction of Babcock and several other Durango engineers and mechanics who worked to restore the oil-burning #18, the engine was used to familiarize engineers and mechanics on the differences between the two types of locomotives, and also explore the economics of an oil-burning engine versus a coal burner. As Babcock pointed out, #18 was not made for this steep mountain route. It can only haul three passenger cars compared to the nine behind the Durango & Silverton’s typical coal-burning engine, which is easily twice as big as the Slim Princess.

Those practical considerations were put on the back-burner as supporters of restoring #18 arrived in Durango. The Historic train station is right downtown. The two days of train rides to Silverton brought together a diverse group of rail fans. Plenty of Owens Valley residents who had supported the restoration work were on hand. Many had watched Mull and the volunteers work on #18 for years, first in Dehy Park, then in the Larry Pecham Engine House at the Eastern California Museum. A large number of volunteers, from Inyo County, California and the western United States also had a hand in the restoration work, and were more than ready to see the fruits of their labor. 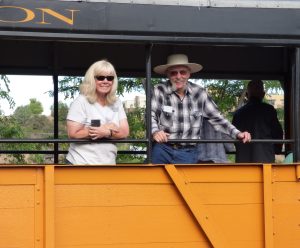 Inyo County Assistant CAO Leslie Chapman and husband Al Campion, in the Gondola Car as it leaves Durango for the 45-mile trip to Silverton, pulled by Southern Pacific #18, the Slim Princess locomotive.

Mull and Babcock greeted the rail fans and shared some stories, and mostly thanked on and all for their unwavering support of the Carson & Colorado’s decades of effort to get the Slim Princess running. Plenty of handshakes, backslaps and congratulations were in order as riders loaded onto the three passenger cars set to make the trip to Silverton.

The train pulled out of Durango and rolled through the lush valley north of town. Before long, started running along the banks of the Animas River as it slowly climbed, mile after mile, into the mountains. The train crosses bridges, tressels and hugs the mountainsides as it makes the four-hour run to Silverton. The engine pulls its cars right into the heart of Silverton, a classic silver boom town featuring colorful Victorian buildings tucked into a high country valley. After a layover, the train heads back to Silverton.

After making the 45-mile journey from Durango, the Slim Princess #18 steams into the former mining town of Silverton. The three passenger cars carried volunteers and supporters of the Carson & Colorado Railway, the non-profit group responsible for restoring the locomotive to operation.

The Slim Princess is not through traveling. Later this fall it will be trucked back to its home in Independence. A welcome home fundraising party has been scheduled for Saturday Nov. 2 at the Eastern California Museum that will feature a BBQ dinner, speakers, tours of the engine house, a good, up-close look at #18, and Randy Babcock signing copies of “SP Narrow Gauge #18 Steams Anew!” Call 760-878-0258 for more information.

(NOTE: The non-profit Carson & Colorado Railway Co. always appreciates donations and memberships that will help keep SP #18 running and providing a living reminder of the rich history of the Owens Valley. To contribute, go to www.carsoncolorado.com.) 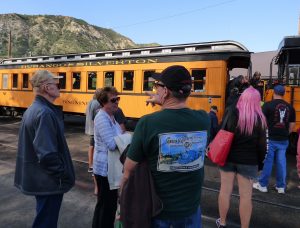 Carson & Colorado Railway supporter Jeanne Willey, center, of Lone Pine, at the Durango train station gets ready for the train ride from Durango to Silverton.

If I’m correct, the Slim Princess got restored in Eastern California. How did you get it to Colorado? On a flatbed and put into place by crane? I’m a railfan from Reno, NV and never realized the V&T railroad had extensions all the way to the south end of Owens… Read more »