By News Staff on January 31, 2012 in Government Agencies/Utilities 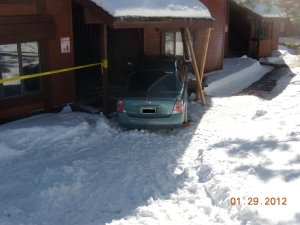 Mammoth Police responded to an accident that sent a car into a condo.  The driver of the car was arrested for driving under the influence.  Here is the complete police release:

“On Sunday, January 29 at approximately 12:55 p.m., Mammoth Lakes Police, Fire, and Paramedic units were dispatched to the area of Minaret and Chateau Road for a car that had crashed into a condominium unit.  The responding personnel determined that a 2003 Nissan Altima driven by Shannon Ellis, age 21 and a resident of Mammoth Lakes, was traveling westbound on Chateau and failed to stop for the stop sign at Minaret.  The car continued across Minaret, jumped a snow berm, and went down a hill crashing into a condominium in the Snowcreek I development.

Neither Ms. Ellis nor her passenger, Kjelli Jennings, also a Mammoth Lakes resident, were injured.  The Police investigation determined that Ellis was under the influence of alcohol.  She was arrested and booked for 23152 (a) and 23152 (b) of the Vehicle Code (DUI) following a breath test which showed her blood alcohol level was .22%, nearly three times the legal limit.

She must have thought it was the drive-thru at Carl’s junior.