By News Staff on February 1, 2021 in General Misc. Stories

Justin Ibershoff (38) of Los Angeles, was descending a technical route down Deimos Canyon with six friends. The group was very experienced, and most members of the party had descended this canyon several times before. The incident occurred while Mr. Ibershoff was descending a steep, rocky slope to the top of the third rappel anchor. He apparently stepped on a rock that moved, triggering a rockslide that swept him past two companions and over the edge of the 95-foot-tall dry fall. 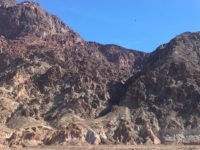 The group used an emergency locator beacon to call for assistance. The group’s ability to send more detailed information via texts through the emergency beacon aided rescuers. After assessing Mr. Ibershoff’’s condition, the group continued down the canyon due to continuing active rock fall.

Crew from the Navy’s VX-31 helicopter reached victim a few hours after the accident but found him deceased.

Inyo County search-and-rescue (SAR) and Death Valley park rangers were assisted by helicopters from California Highway Patrol (CHP) and Naval Air Weapons Station China Lake. Crew from the Navy’s VX-31 helicopter were able to reach Mr. Ibershoff a few hours after the accident and establish that he had passed away. At that point, the incident response transitioned into a body recovery.

Conditions in that area of the canyon remain unstable and canyoneers are advised to avoid the upper section of Deimos Canyon.