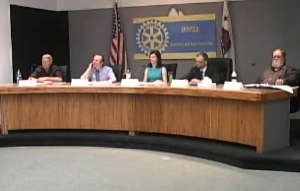 What changes would they make? What things would they keep the same? That was a question asked in the Mammoth Rotary Candidates Forum of all Mono Supervisor candidates.

District 5 Candidate Greg Eckert said the change he would make is to give the County a larger role in marketing and tourism. He said now Mono County spends less than $300,000 a year. Eckert said Mono needs more people here – people who come for a week at a time. After the budget is balanced, he said, more money should be spent on marketing. As for what he would keep the same, Eckert said it’s a vote every June. He said voters can “clear out one of us. The problem with government,” said Eckert, “is people get complacent. Politics are like diapers,” he said. “They shouldn’t be recycled.”

District 1 Candidate Supervisor Larry Johnston said he would change the County into a more collaborative, innovative government. He said the County is currently helping the Town of Mammoth with IT tasks. He said he hopes they can also collaborate on the County’s investment pool where money gets three or four times the interest that the Town currently gets. He said maybe the Town and County can create a joint Human Resources Department. Johnson got a laugh when he said he would not change the “present leadership. We have a great team,” he said. “I am proud of the new group.”

His opponent, District 1 Candidate Bill Sauser said the change he would make is to look outside the box. He said the job the County is supposed to do is to partner and communicate with other agencies. He said he would not change the location of Mono County. “It’s the bet place on the planet,” said Sauser who added he’s been here 60 years. And, he threw in the statement – “I love bears!”

District 5 Candidate Stacy Corless said she would change risk management. She said, “I’m concerned about the lawsuits. They cause significant financial loss and they are employee related. Something needs to change. We need a better culture. We need to step back and use good judgment about what’s right and wrong.” Corless said the County needs to write down clear processes to end the lawsuits – presumably like those involving former Deputy Jon Madrid and County mechanic Dick Luman. Corless said, “We need a culture of safety and well-being.” What Corless would not change is the current direction of a more innovative Mono County and the strategies involving recreation, planning, partnerships, and economic development.

District 5 Candidate Kirk Stapp said he would try to change the attitude gap between North and South County or the County and the Town of Mammoth Lakes. “We can’t collaborate with this blockage,” he said. “This will continue as long as the County holds animosity towards Mammoth. It is Mammoth tax dollars that fund County services,” he said. What he would not change, Stapp said, is the good staff and direction in dealing with wider issues like Sage Grouse, geothermal development in Mammoth and other issues. Said Stapp, “We need to take the lead on changes that might come our way.”

We work to provide daily news to all of the Eastern Sierra, in the tradition of Eastern Sierra News Service and the Sierra Wave. We bring you daily happenings, local politics, crime, government dealings and fun stuff. Please contact us.
View all posts by News Staff →
The life of Jerry Horton
Fashionista news
9 Comments
Newest
Oldest Most Voted
Inline Feedbacks
View all comments

Yes! Yes! Yes! Finally, We The People are finally waking up to our so-called community leaders who instead of finding creative ways to create revenue from tourist dollars, put good, decent people on the chopping block and the bozos who hire them think the hatchet-men are the bees knees. Kind… Read more »

RAM
Reply to  Waiting and Watching

and you will get the government you deserve

I couldn’t agree more, “I wonder.”
Anybody can be a Hatchet-Man.

How a hatchet man works
Reply to  I agree

Webster: hatchet man – a person carrying out unpleasant assignments for an employer or superior. Let’s see … salary reductions for all, no replacing employees that leave, those employees that remain must absorb the workload resulting from the vacancy, and the hatchet man can joyfully report to his superiors: “You… Read more »

Shine
Reply to  How a hatchet man works

Good hatchet man cuts the fat and dead weight. Moves on hated yet well payed or leaving something good for the citizens. Our hatchet men are more B movie slashers.

I wonder
Reply to  Shine

I wonder shine when a big winter hits and there short on people with very little plow experience how your roads will be?

Disappointment with the current BOS

Even though I have to say I generally agree with the majority of what Larry Johnston votes for on the board. I completely disagree with him in his statement that he would not change the present leadership of the board. It is not a great board. It is a HUGE… Read more »

I wonder
Reply to  Disappointment with the current BOS

I wonder how many of us that voted for Fred feel the same way I know I do. I sure hope we get two new supervisors that care about this county the people in it and the employees.

I have to say I totally agree with Stacy Corless. The entire Human resources/Risk Mangement for Mono County needs to be looked at and changed (if not thoroughly investigated.) Especially the time period when Rita Sherman was in charge. She was in charge when both of the cases of Madrid… Read more »