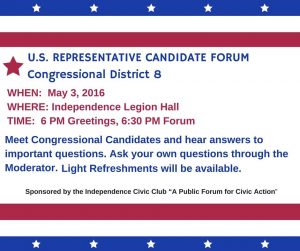 There will be an opportunity for the audience to ask questions of the
candidates. The three prepared questions that were sent to the candidates
are as follows:

1. Inyo County is the second largest county geographically in California consisting of over 10,000 square miles, of which 92% are federal lands and 68% of that is designated wilderness. Due to additional land ownership by the City of Los Angeles of about 250,000 acres, only 1.7% of Inyo County land is in private ownership. While these public lands provide valuable recreation and environmental benefits which lead to a local tourism economy, other uses which could provide tax revenues to Inyo County are very limited. What can you do, as a United States Representative, to help offset this inability to have a normal economy? Would you support additional wilderness designations in Inyo County?

2. The United States is a nation founded by immigrants, who joined Native Americans in inhabiting this great land. Population pressures are increasing throughout the world, resource scarcity, war, and famines drive people to move away from their homelands and seek stability in other countries. At the same time, there are costs and difficulties in absorbing immigrants into a populous nation that provides services such as schools and social services. Please discuss your views on immigrants to the United States, and expand on problems and possible solutions.

3. Political discourse in recent years has devolved into polarized sound bites and yelling matches – in the media and between politicians of differing parties and views. As Senator Ben Sasse said in his maiden speech in the Senate on November 3, 2015:
Socrates said it was dishonorable to make the lesser argument appear the greater – or to take someone else’s argument and distort it so that you don’t have to engage their strongest points. Yet here, on this Floor, we regularly devolve into bizarre partisan-politician speech. We hear robotic recitations of talking points. Well, guess what: Normal people don’t talk like this. They don’t like that we do. And, more importantly, they don’t trust us because we do. How do you think polarization affects Congressional effectiveness? How do you feel about compromise with the opposite political party when seeking solutions? Would you take a political position because it was the right thing to do, even though it risked your re-election?

This may be the first time in history that Inyo County has hosted a U.S.
Congressional District Candidates Forum. Please be present so Inyo
County has a voice.

*These candidates will be answering the prepared questions, but will not be in attendance.

Bernie Sanders is 420 friendly, so he got my vote

Sad that the candidate, Mr Pinkerton will not be in attendence and worse when our own Congressman fails to show, to measure up with the other candidates. I don’t know what is up with that , failing to ask his constituants once again for their support and missing out on… Read more »

As Thomas Jefferson said: “If a nation expects to be ignorant and free in a state of civilization, it expects what never was and never will be.” You get what you deserve if you don’t avail yourself of the opportunities to educate yourself on the candidates and issues that we… Read more »

Well said @High Desert Dweller!
I couldn’t have said it better myself. :0)

I’d rather go to a funeral.

That explains a lot.

Ignorance is bliss. Thanks to our constitution we have freedom of speech. A lot of people on this forum use that freedom to demonstrate their ignorance every day.

DESCO…..He’s not a participant on these Sierra Wave’s forums,but your post here describes your hero trump to a tee….