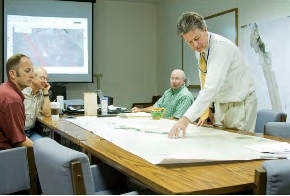 In response to public criticism of his choice for four-lanes in the Olancha area and his refusal to hold an immediate public workshop, Caltrans Director Tom Hallenbeck points to environmental law and to what he sees as a realistic assessment of costs.

Business owners and citizens in Olancha have publicly attacked Hallenbeck for his choice of the Preferred Alternative which is a combination of Alternatives 3 and 4, a four-lane bypass of Olancha to the west.  Citizens say Caltrans cooked up this new alternative and did not bring it back to the public for discussion.

Hallenbeck points to the Draft Olancha-Cartago Environmental Assessment.  That document says it’s okay to combine alternatives after a public review of all of them.  Hallenbeck says that the public had many opportunities over many years to comment on all the alternatives, including the two he combined.

Hallenbeck said he will do a workshop later but not now when the public comment period has been closed.  “There are no new impacts,” he said, “because of a new alternative.”

Citizens against Hallenbeck’s plan say a by-pass will finally kill Olancha and destroy the viewshed and recreation to the west.  The Inyo Supervisors took a stand for Alterntive 1, widening the current highway, and so did many citizens.  Hallenbeck pointed out that Caltrans has over 300 pages of comments on the plan.

Meet Duncan and Jarvis
Hello Dolly! A Playhouse 395 production is a Must-See

Speaking of environmental impact,and impacts on the view of the Sierras’,how is that Whitney Portal Estates project going outside of Lone Pine?….Oh,wait…I live in Lone Pine,I don’t have to ask…What a big waste that turned out to be for anyone that supported and put money into that “project”.

I am not completely sure where Olancha is – and I lived in Southern California for 3 years, my parents for another 15 years in the desert. At any rate, it sounds like the residents of Olancha are split between wanting the peace and hoping the freeway will save their city. That puts Caltrans in a bit of quandry, so they need to hang their hook on something. Choosing a combined alternative is not against CEQA laws, but deciding that the DEIR is the be-all and end-all is erroneous. CEQA environmental review does not end until the lead agency approves the FEIR and project, and there are no lawsuits filed from those of standing contesting the approval within 30 days. Those of you opposed to the preferred alternative need to marshal your resources if you intend to sue Caltrans over their final project decisions.

At least Janet and I use our REAL names, TROUBLE. Why do you find it so necessary to keep your identity unknown? I speak my mind & put my brand on it. If yours is SO superior to mine, why can’t you do the same ?

Why is everyone so enthusiastic about creating a 4-lane all the way up 395? 4 lanes may cut down on traffic fatalities, but it won’t eliminate them. A few less dogs may be hit, but why are they running along the highway anyway? Olancha residents will be free from the noise and high speeds of the highway, but it’s businesses will fail. And I’ve heard many people say they’d just like the traffic to decrease, so why would those people want an expansion in the first place which allows more trucks and passenger vehicles to travel through our valley? It really seems that this project really doesn’t have any clear benefits for anyone EXCEPT CalTrans. I have heard the bogus argument that traffic will double in the next 20 years (historically, increases in fuel prices DECREASE traffic volume, and a declining economy doesn’t lend to more traveling or transport of goods either). In a time when California is financially unsound, should we really be spending money expanding a highway that really doesn’t need expansion at this time? It seem to me to be government as usual. Wasteful, unnecessary spending. They are just spending money because if they don’t they’ll lose it in next year’s budget.

Does anyone remember the BLM campsites and those wonderful new lantern posts they wasted our tax dollars on?

Just a note on this post. We have noticed over the past 37 years that traffic accidents and fatalities have been reduced dramatically. When I first started covering news in 1975, there were almost weekly, brutal wrecks on 395 in the two-lane sections. The four lanes coupled with drunk driving laws have led to far less carnage on our roads, and that’s a good thing. Benett Kessler

Bennett- I think you left out that passing slower vehicles as maybe the biggest cause of past accidents on two lane highways.

Problem with that is ,for most,a “slow moving” vehicle is those going under 80 MPH.If your going the 65 speed limit your going to have some idiot tail-gating you.

Yes. That’s true. Many of the wrecks were head-ons in the two-lanes. BK

Ash…Sounds like your a real dog lover…..And the debate isn’t IF we need a 4 lane through Olancha,it’s where it should be.

I remember taking a survey a couple of years ago with four different plans. I opted for the new four lane around the town. I chose that plan because widening the current road would mean cutting down those beautiful oaks and moving businesses. I can’t wait until it is done around 2018 or so.

Maybe it was rude of myself to say thanks for nothing. I don’t agree with Mr. Reese in many ways here . My anger is mostly with Caltrans being able to take part of two different plans and claim they are doing what the people of Olancha want. In the previous article I first thought they should have done nothing at all. But after hearing all the arguments I agreed with two things. First- something did need to be fixed due to all the deaths in that area. Second , that Jennifer’s argument that they should widen the road where it is made most sense to me. Sorry for being rude Steve.

Hey we all have are days.

I am in support of by-passing not plowing threw the towns. As a Olancha home owner I want the highway as far away as it can be. There already is to many deaths at 2 per year on average. With the completion date some time in 2016 that will be 8 more lives lost. Will it be me or you or some one you love.

We all need to look at it from the future because highways stay around for a long time. So it is more of what will be in 10 to 20 years or more. My choice is to keep the town peaceful and with as little traffic as possible.

Trouble, I do not think you were rude, just expressing yourself.

if you live in olancha and safety is an issue, widening the road along the existing corridor will imporove safety also..

or widen the road to the east..where there will be no visual impact and physical impact to people who like to look at the mountains without being reminded of how caltrans ignored the people in olancha and just spent the money and pandered to
the LA people who just want to ignore everything and get to mammoth!!

one more thing..what environmental affect is there building the road to the east of the existing highway or two more lanes to the existing road? this is consistent with the road all the way to bishop..widen the road like it is coming into lone pine!!!

all you people who supprt hallenbeck probably love that the USA is becoming a debtor nation!!! …..we will never get out of debt!!! huh big Al…why don’t all the people who want the road to the west pay for it!!! don’t send me a bill for it!!! we do not need it!! send the bill to big al and all the rest of you big spenders!!

LOL jeffrey, If you’re going to send us the bill and defer your part in taxes, then you can’t drive on it.
This isn’t what is getting us into debt. But that is another argument. And the lucky number of lanes that would be added to the middle of town would be three lanes. For a grand total of 5 lanes through town.
And how is traffic going to move too well through town while the highway is torn up, bottle it up with two lanes after they came through and cleared and graded all of the parking area for all of the businesses on one side (this property will be gone, now the businesses will be feet from the highway, like what happened in Independence).. prepare it for final grading for the new part of the alignment, pave one half of the road, sign it and stripe it for further temporary two way traffic. Then do the same thing on the other side of the road. When it is all said and done, you have a massively wide 5 lane highway right through your town complete with side walks. With not much left of the town.
As I have said either way the town will survive it if it can make its survival happen. Tell me, when did the town ever thrive in the past, where is the remains of all of the businesses aside from one or two places. If Olancha and Cartego are to survive, it takes the people doing things to make it happen aside from trying to stop a highway, that is important to more than just locals, from going around or through their town.

I agree Big Al. To me this is a small example of what will happen if Caltrans tries this crap with Indy, Big Pine and Bishop. We stand to lose a lot of jobs and property values. Each of these towns make a living off main street traffic. Other wise we become a town like Wilkerson.

LOL LIke Wilkerson? Really? LOL When was Wilkerson ever a town .. as far as I know it was a ranch that was sub divided into lots, oh wait yeah it has a store, that is no longer open, I don’t think that had anything to do with highway traffic.

That made me laugh Trouble … things were getting too uptight here .. LOL

Thank you Tom and keep up the good work. I support you and the work your team has done. I only wish it could be done faster.