By Charles James on August 23, 2020 in Fire, State of California

The state was struck by lightning 10,849 times over the course of 72 hours said Gov. Newsom at news conference 3 days ago.

Governor Gavin Newsom said the SCU Lightning Complex fire south and east of San Francisco was the third largest in the state’s history.

Weather and COVID-19 continue to complicate the situation.  Concern over even more lightning strikes and forest officials have said that campfires left unattended by visitors to the forest areas have shown a 300% increase. Most wildfires are started by human agency/activities such as debris-burning, electrical power, vehicle, equipment use, arson, lightning, campfire, playing with fire, smoking, etc. (Source: What causes wildfires? San Francisco Chronicle, May 31, 2019) 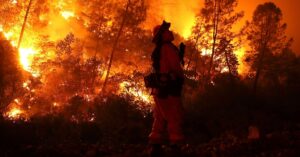 Over 14,000 firefighters are battling 585 fires that have now burnt nearly one million acres. Reinforcement crews, fire engines and aircraft from 10 states, including Arizona, Oregon, Washington, Texas, Nevada, Iowa, Utah and Montana, began arriving in California on Friday to help to state’s crews who have been tirelessly fighting the blazes all week.

Governor Newsom has also reached out to Canada and Australia for support, specifically for firefighter personnel, to help “overwhelmed” frontline heroes.

At least six people have died, and thousands have been evacuated, with some people refusing to leave the evacuation zone out of stubbornness or wanting to protect their homes from the fire and others who use the chaos to commit crimes. Best advice: Leave. You can replace your home and valuables; you cannot replace your life.

At least 43 people including firefighters have been injured, and hundreds of buildings have burned down and thousands more are threatened.

With 650,000 coronavirus cases, many evacuees are grappling with fears over going to emergency shelters. People entering Emergency shelters are being given pre-screening temperature checks and asked to answer a series of health questions. Shelters are enforcing social distancing rules and mask wearing and some cases, are even giving out tents to families to self-isolate, while others are setting up separate emergency shelters for evacuees that display a high temperature. In unable or unwilling to stay at an emergency shelter, officials are telling people to consider sheltering with family and friends.

High winds are forecast and threatening to drive flames into more populated areas as dirty air from smoke blankets the state.

Wildfires, started by lightning and stoked by a searing heatwave, combined with fierce winds, have been moving quickly, overwhelming the state’s firefighters and first responders.

Governor Gavin Newsom reported at a press conference yesterday, Wednesday, August 19th, that the state is currently battling 367 known fires. “We are challenged right now,” the governor said. The state was struck by lightning 10,849 times over the course of 72 hours, he said.

Newsom went on to say that nearly 7,000 firefighters are currently on the frontlines and the state has been forced to call on outside resources for backup, requesting 375 fire engines from neighboring states.

Arizona and Nevada have sent equipment to California and Texas has offered to send firefighting crews, Newsom said. 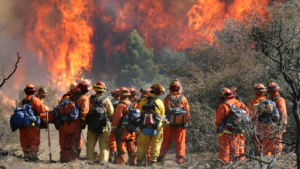 30% of state’s firefighters are inmates, but with the coronavirus pandemic shutdown of many prisons and early releases, there is a severe shortage of firefighter resources.

And thanks to inmates locked down due to the coronavirus, the firefighting effort is handicapped form the lack of backup resources.

CalFire reported that a helicopter pilot near Coalinga on a water dropping mission in western Fresno county died after his helicopter crashed on Wednesday morning.

Climate change, as evidenced by the soaring temperatures around the state, country, and around the world, is behind the rapidly growing number of wildfires world-wide, especially here in California, says experts. Those experts also say that it is not going to change, but only get worse.

Big Pine Volunteer Fire Department Posted the map below on its Facebook page: 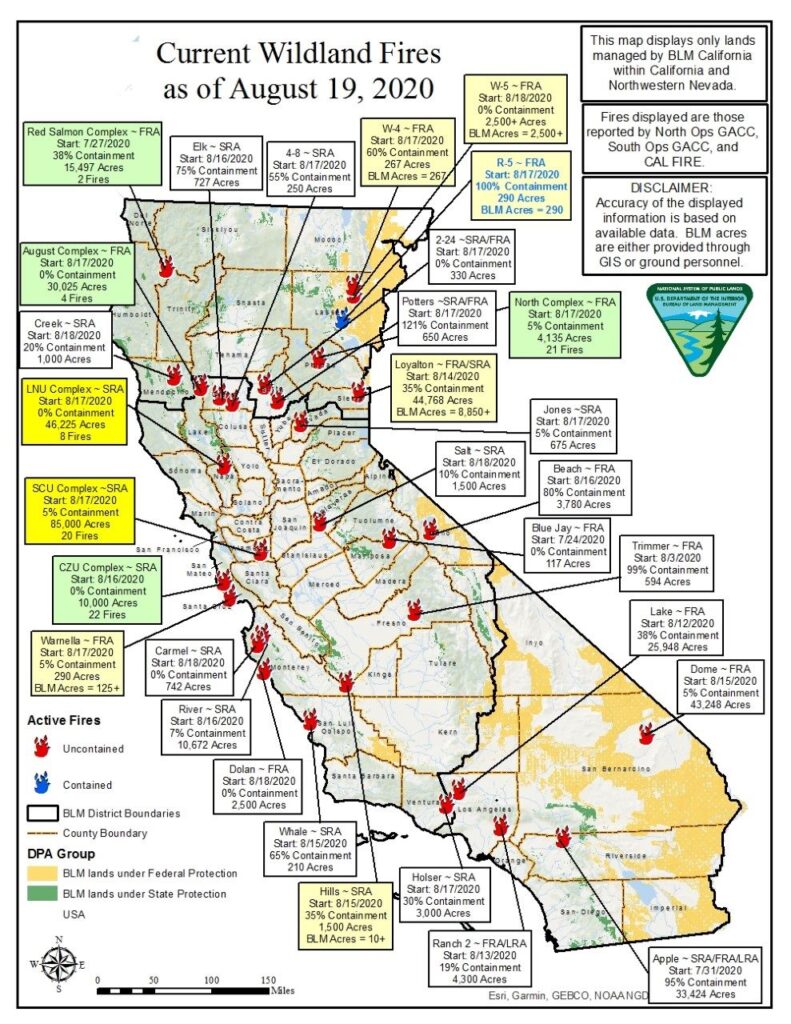 Am I the only one wondering if 585 fires is atypical during a fire season in CA?

Initiated in one weekend? Yes, that is atypical to say the least.

Can you provide some data or a source that would substantiate your claim?

this is not rocket surgery–

Thanks, Charles. Based on that data, CA’s total number of fires is 40% above the 5-yr average, but the total acres burned is 67% below average. Interesting.

Not sure if you can really place blame and I really don’t think you can critique the response after looking at this……https://activenorcal.com/15-insane-photos-from-northern-californias-2-day-lightning-storm/

Charles, you are the best news source in Inyo County. You and and your station really go into the details and are not afraid to report on news that may step on some toes! Keep up the good work.

From the article: “Most wildfires are started by people being careless with campfires.” “Climate change, as evidenced by the soaring temperatures around the state, country, and around the world, is behind the rapidly growing number of wildfires world-wide, especially here in California, say experts.” Which is behind the “rapidly growing… Read more »

Tourbillon, “Most wildfires…” was supposed to read “Many wildfires…” based on a conversation that I had with an INFS official during last year’s fire season. The wording was changed to read “human agency/activities,” i.e., “human-caused,” which includes a host of causation found in fire studies. “Uncritical appeal to the authority… Read more »

Came for the article on fires, stayed for the intellectually stimulating comments. Anyone else hear a crowd cheering, “Jerry! Jerry!”, or is that just me?

Thank you! Even the weather and existential threat of wildfires is not safe from politics. We’re doing something rare; we’re removing political comments from this post as you are not the first to complain about the politicization of…everything. Climate change is a legitimate course of discussion for this post. The… Read more »

Bravo! There have been a lot of political comments lately in response to anything. Many if not most are stupid/insensitive or just pointless. SW isn’t obligated to be a sounding board for cranks.

And yet your comments are posted. Ironic.

Does that mean Davidson’s posts will not be shown?

As we said, we are not going to allow every topic posted to be turned into a political circus. There are plenty of Facebook groups out there for people to express themselves on. Does this mean that no political comments will be allowed? No, but not on this particular thread.… Read more »

Thank you Charles James! And THANK YOU to the firefighters on the front lines trying to bring these fires under control.

Couldn’t be the flawless environment policies could it.