By News Staff on May 28, 2021 in Mono County, News Releases, Press Release

The California Department of Fish and Wildlife (CDFW) has suspended all fish planting from the Hot Creek Trout Hatchery in Mono County as a bacterial outbreak has been detected at the facility.

Fish pathology experts have confirmed an outbreak of Lactococcus garvieae in some trout at the hatchery. CDFW has quarantined the facility, halted all fish planting, and is preparing to expand testing and vaccinate the fish stocks. Lactococcus garvieae is the same disease that forced the quarantine and suspension of fish planting last year at three other CDFW trout hatcheries in Southern California and the eastern Sierra – the Mojave River Hatchery, Black Rock Trout Hatchery and Fish Springs Trout Hatchery. That outbreak ultimately forced the euthanization of 3.2 million trout at those hatcheries.

“Unfortunately, the timing couldn’t be worse with the holiday weekend coming up, Mule Days taking place in Bishop and a lot of people coming to fish the eastern Sierra this time of year,” said Jay Rowan, Acting Fisheries Branch Chief for CDFW. “We don’t yet know the extent of the outbreak at Hot Creek Hatchery, but we do have the advantage of some additional tools in our toolbox now versus a year ago, including recently developed vaccines that we started rolling out to fish at the three previously infected hatcheries earlier this month.” 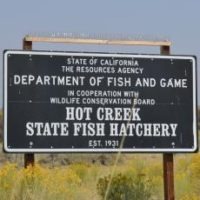 The outbreak of Lactococcus garvieae, which is similar to streptococcus, has been reported in cattle and poultry farms as well as fresh and saltwater fish and shellfish hatcheries around the world. It had never before been detected in fish in California until the hatchery outbreaks last year. Hot Creek Trout Hatchery was originally quarantined with the other three hatcheries last year out of caution, but the quarantine was lifted after testing found no evidence of the disease.

Fish that are infected with Lactococcus garvieae can show symptoms including bulging eyes, lethargic or erratic swimming and increased mortality, or be asymptomatic and show no signs of infection depending on a several factors including water temperature and stress. Fish-to-human transmission of this bacteria is rare and unlikely but there are several documented instances associated with immunocompromised people consuming infected raw fish and unpasteurized milk products. 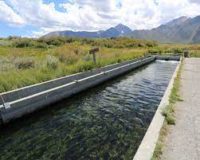 For real-time stocking updates, California anglers can refer to CDFW’s Fish Planting Schedule. This schedule is updated directly by CDFW hatchery staff. Although it contains current information, all fish plants are subject to change depending on road, water, weather and operational conditions.

Northern Inyo Hospital Prepared for Anything Over this Long Memorial Day Weekend
Mammoth Museum at the Hayden Cabin Now Open!