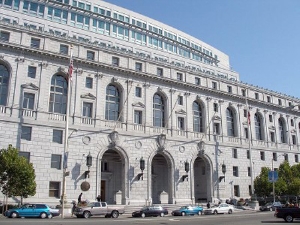 The high court said no to a petition to review Mammoth’s appeal.

The California Supreme Court shut the last legal door for the Town of Mammoth Lakes when they issued their decision today to deny Mammoth’s petition for review of the Hot Creek court decision and $30 million judgment.

Mammoth Mayor Skip Harvey said he had been optimistic but not surprised by the decision. The Mayor said, “I’m really disappointed. It makes me question this thing called the American justice system.” as for what lies ahead, the Mayor said that the Town Council has been looking at all of the options and will now take it to the next level – the best option. The Council had earlier said they would examine settlement negotiations with the plaintiff and municipal bankruptcy.

The strong opinion issued by the Third District Court of Appeal against the Town of Mammoth created doubt about a Supreme Court review. The Appeals Court judges wrote that Mammoth’s arguments had no merit and that the Town had, as the lower court found, breached its agreement with Hot Creek, now referred to as Mammoth Lakes Land Acquisition.

While the petition to review was pending with the Supreme Court, Mammoth Town Attorney Andrew Morris had told Sierra Wave earlier this month that the Town was expecting letters of support from the League of California cities and the California State Association of Counties. It is not known if those letters arrived.

Mayor Harvey said that the Town has been gathering data about their options and would likely begin to take action after this next closed session.

The breach of contract case at the center of the issues involved a development agreement between the Town of Mammoth and Hot Creek for a condo development on land adjacent to Mammoth Airport.

We work to provide daily news to all of the Eastern Sierra, in the tradition of Eastern Sierra News Service and the Sierra Wave. We bring you daily happenings, local politics, crime, government dealings and fun stuff. Please contact us.
View all posts by News Staff →
Love of community multiplies in help for Big Pine fire victims
LADWP and Air Pollution Control reach dry lake agreement on more dust control