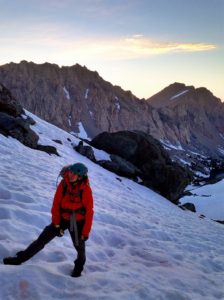 The first SAR mission involved a man stuck on a cliff near Dragon Peak, above Independence. While descending a steep rocky chute near the peak the evening of Saturday July 15th, the subject became irreversibly stuck on a small ledge and had no warm clothes or survival equipment because his backpack had fallen down the cliff earlier. 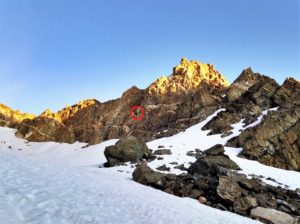 Two Inyo SAR members hiked through the night on Saturday to his location, arriving at the base of the cliff at 3:30 AM. In the dark, the rescue team climbed about 75 feet of technical rock using climbing equipment and lowered the hiker to a snow field. The subject was cold but uninjured, and was able to hike out with the SAR team to the trailhead.

The second rescue mission was an injured hiker on the north fork of Whitney near Boy Scout Lake on Sunday. A male subject had fallen while hiking Mt. Whitney, injuring his back. The California Highway Patrol Central Division Air Operations H-40 helicopter crew was able to land and evacuate the injured hiker to safety. 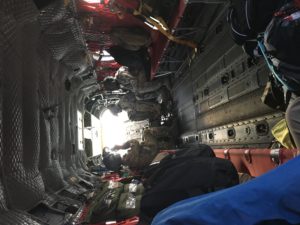 The last mission over the weekend was an injured male paraglider on the side of Mt. Tom near Bishop. The victim crashed into the side of the mountain while flying, sustaining serious trauma and multiple broken bones. The CHP H-40 helicopter (already on the Eastside assisting with the Mt. Whitney mission) inserted an Inyo SAR member at the base of Mt. Tom to hike in and provide medical care. However, due to the heat H-40 was unable to fly to the crash site. Late in the afternoon, a Chinook helicopter from the California Army National Guard flew from Stockton, and was able to successfully hoist the victim and the rescuer from the crash location. 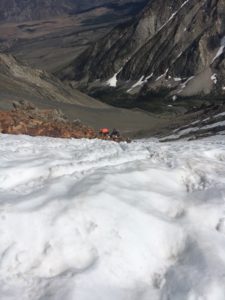 Inyo SAR and the Inyo County Sheriff’s Office would like to thank the CHP – Central Division Air Operations crew and the California Army National Guard for their professionalism and skill while aiding in the weekend’s missions.