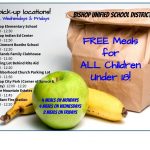 BUSD’s Free Meals for All Children Under 18 has been a phenomenal success story.

The Bishop Unified School District’s school meal distribution program has been phenomenally successful! The district went from serving 150 kids per day before their outreach program started several weeks ago to over 450 and the numbers are still climbing.

Sierra Wave first reported on this wonderful story, BUSD Providing Free Meals to All Students In Bishop Area, on April 23rd, describing how the program worked, and then in a separate story, FREE meals for ALL children under 18! BUSD Locations & Schedule, we provided the delivery schedules for the meal pickup locations in both English an Spanish.

With such a great response, the school district has decided that instead of serving 10 meals a week per student, they will be serving 12 meals a week to cover food for the kids Monday – Saturday. So, on Mondays, Wednesdays, and Fridays each student meal bag will contain 4 total meals – 2 breakfasts and 2 lunches.

In addition, instead of the program ending on what would have been the last day of school, June 5th, we will continue distribution through June 30th.

Bishop Unified School District wants to thank the community for helping it make this happen and they are so happy to see that families responded so enthusiastically to the meal program.