We talked about it at our Bureaucrat Beat card table and decided that you don’t have to be of any particular political party or persuasion to come to the conclusion that corporations now run our country. That leaves us, the little guys, out in the cold, sometimes literally if you can’t afford the high price of heating oil. 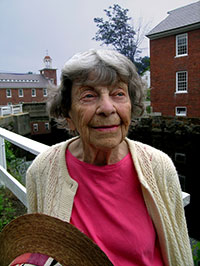 Granny D. She’s 97 and the subject of a new HBO documentary called Run, Granny, Run. When she was a mere 90, the spirited woman walked across much of America to draw attention to her political cause – major reform of political campaign funding. Over the week-end, she was interviewed on National Public Radio. Her statement was, “We are not running our country. The corporations are running it.” What she means is that our politicians take campaign funds from the corporate big guys. They expect favors in return and get them. So, as long as the candidates need megabucks to run for office, they’re going to get them from big business and the bulk of the American people perform the role of voting. End of story for us. We don’t get the favors, just the tax bills.

We decided America needs more Granny D’s. Even with emphesema and old age, she walked the miles to draw attention to big money influence on elections and politics in general. Her statement is, “If our country isn’t worth fighting for, I don’t know what is.” She challenges all of us to take back our country. NPR reported that every time Granny D would make an appearance on TV, Congressmen and Senators would receive “hundreds of thousands of messages from constituents.”

Others have called our system, “legalized bribery.” This issue crosses party lines and falls right into the Bureaucrat Beat newsroom.

On to suspicious packages. One of our listeners, Stan Smith, posed the question, “Why does the post office have a policy that anything mailed over 13 ounces has to be specially processed for danger?” Good question. Since we all know danger comes in many sizes.

We called Rich Maher of Postal Service information. By the way, he assured us he’s no relation to cynical comedian Bill Maher. Rich Maher said that the rules ban placement of a 13-ounce or larger parcel with stamps into the blue postal collection boxes. You have to bring them into the post office and hand them over face to face. If you use a postage meter or Click’N Ship on the internet, it’s okay to put packages in collection boxes because your identity is on record with your credit card.

Maher explained they’re trying to eliminate anonymous-type pieces of mail because of Federal Aviation Administration rules. This is because parcels are shipped via airplane. So, what’s with the magic of 13-ounce packages? Maher said that “specialists determined the risk of package sizes” and potential containment of bombs.

Oh, my, life has grown so complicated. It’s all about security. Somehow all of this does not make us feel safer, just irritated that we have to follow more rules. Compliments to the postal service and Mr. Maher for the effort to help us understand.

If it’s one of those days and you just can’t bear the reality, here’s a solution! A company called Microvision has invented technology that makes it possible project images and words behind glasses. So, say, you have to sit through a public meeting that has the effect of brain numbing and frustration on top of that. You flip on the glasses and whirl into the world of, say, The Full Monte or maybe you watch Run, Granny, Run. Wow! Talk about reality altering.

On a more practical level, you could program in a speech you have to give and, unbeknownst to your audience, you can read it and look like a true public speaker.

If only the inner character of society were as advanced as its technology!

These glasses should sell like hot cakes in Mammoth where every other day there’s another meeting to attend.

Finally, we will give deep thanks to the firemen and women who must deal with the Southland inferno. Some of our own firefighters have gone down to help – from the Mammoth Fire Dept. and Bishop Fire Dept., and the Inyo National Forest. We in the Bureaucrat Beat newsroom do not often refer to religion, but in this case, we ask that you pray for these people and for all those who face the terror of rampant fire.

With that, this is Benett Kessler, signing off for Bureaucrat Beat, where we await your word about our lives in the Eastern Sierra and beyond.

We work to provide daily news to all of the Eastern Sierra, in the tradition of Eastern Sierra News Service and the Sierra Wave. We bring you daily happenings, local politics, crime, government dealings and fun stuff. Please contact us.
View all posts by News Staff →
Local Crews Battle Southland Flames
Burglary at Bishop Nursery