As some of you may know, the issue of the Caltrans highway widening and planned removal of 100 trees north of Independence, to make way for sidewalks, sent property owners, including me, to Sacramento to fight the plan before the California Transportation Commission. The entire experience left one weary and saying, Wow, to the monolithic nature of the bureaucracy. 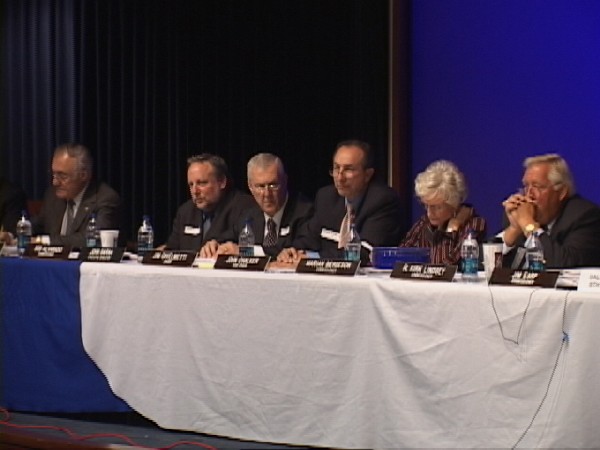 Eight property owners had united to try to reach a compromise with Caltrans, so that we could save some of our private land and the valuable trees along with it. After all, reports say that Inyo has lost an estimated 60,000 trees over the years to water export.

Anyway, the short of it is the bureaucratic process for citizens was obscure, ineffective and conflict-producing. Qualities that most citizens would not invite and could not spare the energy and money to combat. This brings to mind one of the lines in the Declaration of Independence,which says of King George, “He has called together legislative bodies at places unusual, uncomfortable, and distant from the depository of their Public Records, for the sole purpose of fatiguing them into compliance with his measures.” Sacramento is a long, long way from Inyo County.

We will say that some of the Transportation Commissioners were aghast at the fact that conflict had escalated from a tiny stretch of highway to the state capitol. They said that the process was likely flawed and needed attention. Boy, are they right about that. They voted for Caltrans to work with the citizens on this 4-lane plan and work out the differences. Hallelujah!

We look forward to working closely with the bureaucracy to resolve issues. We also look forward to the higher-ups taking a serious look at their bureaucratic ways to make them more kindly to the people.

Meanwhile, cudos to Caltrans for getting on with the four-laning of what locals call “Death Alley” – the two-lane section of Highway 395 between Independence and Poverty Hills. Too many wooden crosses stand in the highway shoulders to mark the tragic deaths from head-on collisions.

Two of our Bureaucrat Beat fans passed along quotes from Gandhi, the man who led India to freedom from Great Britain. Quote number one: “You must be the change you want to see in the world.” Hey, we admit it. The Bureaucrat Beat staff spends hours on criticism and meticulous dissection of issues and political behaviors. Okay, so it all goes back to individual actions. Makes sense. The other night, parents from Independence showed up in large number at a school board meeting to speak softly but firmly in favor of modest raises for the teachers in town. It was a Friday night. No one much wanted to spend it at a meeting, but they did it for their kids and the town, they said.

Want to see a peaceful world? Master human relations in your home and neighborhoods. Makes even more sense.

Gandhi quote number two from one of our fans: “The 7 deadly social sins are politics without principle, wealth without work, commerce without morality, pleasure without conscience, education without character, science without humanity and worship without sacrifice.”

Hello, Washington, D.c., do you ever read Gandhi? Guess not. Considering an article from the MSN Money website shared by one of our listeners. It says, “According to the Internal Revenue Service data announced last week, income inequality in the U.S. is at its worst since the 1920s (before the Great Depression). The top percentile of wealthy Americans earned 21.2% of all income in 2005, up from 19% in 2004, while the bottom 50% of wage earners earned 12.8% of all income that year, down from 13.4% a year earlier.” Bottom line – the rich are getting richer and the poor are getting poorer.

A small chapter of the Confusion Infusion of Bureaucrat Beat:

One listener wrote to us about “terrorism is alive at the Post Office.” He referred to the rules on parcels 13 ounces and over. You can’t just put stamps on them and mail them in a collection box, you have to take them inside or use a postage machine or internet mailing. As the listener pointed out, a bad guy could get a postage machine or internet mailing with a fraudulent credit card. What about that?

The Postal Service said “specialists” determined the risk of parcel sizes to help implement rules. Our listener wanted to know how much money was spent by government higher-ups to conduct this study. Good question. We have no current answer.

And, finally, FEMA’s fake press conference. Did you hear about that one? Seems some FEMA higher-ups organized a press conference over the southland fires. Reports said they gave news media 15 minutes to show up, and when they, predictably, didn’t, seems FEMA staff threw officials softball questions to fake the press conference. Oh, please! This perhaps best exemplifies the troubles in Washington, D.C. Truth has very little significance. It’s the show that counts. FEMA Director Michael Chertoff claims no responsibility for the charade, but one wonders – department heads do set the tone for behavior of the rest of the workers. Would anyone in FEMA done this without believing Chertoff would endorse it? Don’t think so. Come on, guys, quit the phoney baloney!

With that, this is Benett Kessler, signing off for Bureaucrat Beat where we await your words on our lives here in the Eastern Sierra and beyond.

We work to provide daily news to all of the Eastern Sierra, in the tradition of Eastern Sierra News Service and the Sierra Wave. We bring you daily happenings, local politics, crime, government dealings and fun stuff. Please contact us.
View all posts by News Staff →
Owens Valley Honors Fallen Soldier
Steve Searles: Column One