Words of the day convey some of the current meanings of things. Stephen Colbert’s word, “truthiness” has been described as 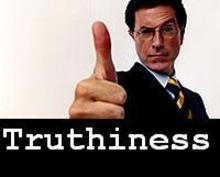 sublimely idiotic. It also reflects political communiqus that are less than forthright. We also liked another word that a guest on the Bill Maher Show came up. His panel kicked around the strange candidates in this election. She described the situation as one of “cringeworthiness.” I feel your inner cringe.

Voters feel the cringe when it comes to ballot propositions. Local voters have repeatedly told us in the Bureaucrat Beat Newsroom that the propositions are “written by and for lawyers” and are “deliberately written to deceive us.” These people tell us they will just vote no.

Others fear that if Proposition 23 does not pass, their trucking businesses will suffer. Prop 23 would delay California’s Global Warming law that requires a cutback in carbon emissions. Prop 23 would delay that until unemployment drops to 5.5% for a full year, which has happened three times in the past forty years. Those who favor the proposition say big oil supports it and just doesn’t want to obey laws to help with our environment.

Locally, Jeff Hansen in Lee Vining, owner of Construction Specialties said he supports Prop 23 and said it’s not anti-environment. He calls it a vote against bureaucracy. Seems that the California Air Board experts have failed to accurately calculate pollution that might be caused by trucks and heavy equipment. Hansen fears he will have to spend $20,000 per truck to retrofit them with filters. That’s a devastating business requirement. Sounds like Prop 23 has brought to light a much deeper fear and anger over the Air Resources Board.

We in the Bureaucrat Beat Newsroom have grown weary of government by initiative. We need a proposition that will put a halt to propositions for awhile. So, for now, we suggest you study the official voter information guide and give it your best shot. 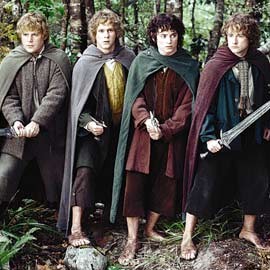 We would rather read articles about the “Lord of the Rings” prequel, “The Hobbit”. Seems some actors’ union issues almost sent the film crew, actors and producers flying out of New Zealand where they want to shoot the movie because of the incredible, fantasyland scenery. With the rest of the world hurting for want of money, unions that insist on status quo may have to join the rest of the human race. After all, think of the modest little houses Hobbits live in.

Some of our listeners/ readers have been aghast at the stories about welfare fraud. You know, the welfare debit cards used at Las Vegas casinos, on cruise ships. Then, there was the story about banks making millions on fees charged to welfare recipients who use ATM cards. One of our fans said he was aghast when he saw a woman using food stamps in Vons and then driving away in an expensive 2009 Lincoln Navigator. We’ve all become sensitive to how money is spent.

Here’s where you should not spend your money. Online scammers. Wayne Deja of Lone Pine shared an ongoing attempt to scam him. An email from Barrister Daniel Akosa from Kara, Togo. That’s a country in West Africa. So, this guy tells Deja he won $8.5 million and that “God” has brought them together. Then, he wanted Deja’s bank account number. Good grief. Whatever you do, people, never, ever give personal information to a strange emailer.

Here’s a bizarre statistic. Think about this. A New York Times article reported that researchers at Iowa State University calculated the cost of a single murder to society. It’s $17.25 million. They calculated victim costs, justice system costs, lost productivity estimates, future program costs. Yes, the other crimes have costs, too. On top of that staggering thought, think of this. Over the last 25 years, the prison population has quadrupled in the U.S. The article suggests that better education and social services could have prevented many crimes. The columnist offered that it might be best to pay more now than later.

Finally, we’re still slogging through the Pig Book 2010 from the Citizens Against Government Waste. It’s clear that Congress could save billions by a one to five-year hiatus on spending. The country would not collapse. Yes, some people might lose jobs. Others would gain. Would Mississippi collapse without the $10 million for the Sustainable Energy Research Center? Or, would or country go down without ten C-17 aircraft that cost $2.5 billion???!!! Even Senator John McCain voiced strong opposition to this huge expense. He said the Department of Defense didn’t even want them. Somebody did, but it was through an anonymous earmark. They don’t even have to own up to the way they spend our money.

We work to provide daily news to all of the Eastern Sierra, in the tradition of Eastern Sierra News Service and the Sierra Wave. We bring you daily happenings, local politics, crime, government dealings and fun stuff. Please contact us.
View all posts by News Staff →
Inyo Jury Finds Auburn Man Not Guilty on Two Felonies
Mattinson on Cabernet