By News Staff on August 8, 2007 in Bureaucrat Beat

The Bureaucrat Beat staff huddled and agreed that we do not feel safer today because the President has signed a new law that gives the government greater ability to eavesdrop on phone calls and emails without warrants. 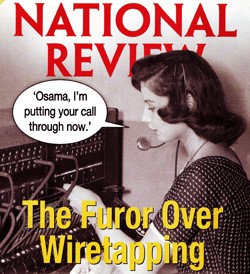 Hey, great if they happen to hear someone in the U.S. talking to an Al Quaeda operative Pakistan, for instance. But what if Aunt Susie calls her cousin in London? Yes, folks, the National Security Agency could be listening in. Under the new law, the U.S. Attorney General and director of national intelligence, not a court, have the power to compel telecommunications companies to let them wiretap.

We look to the Constitution and its amendments on this. The protection against unreasonable searches springs to mind. This is a privacy protection, and this wiretap business seems to fly in the face of such protection. The most disturbing part of all this – we have no reports on the effectiveness of such a program or what’s really on. The higher-ups claim “classified” information.

The Bureaucrat Beat staff talked long and seriously about this and decided that the Administration should not have greater wiretapping authority until they do some other things – like make sure our own government doesn’t hand out dirty bomb material to any schmuck who writes in for it (this did happen), really secure our ports from potential threats and start doing some positive things for other countries that will change our real relationships in the world so that people don’t want to blow us up.

Even Newt Gingrich had an alternative idea to waging what he called the “phony war on terror” recently. Instead of the current strategy to fight terrorism, Gingrich recommended a focus on energy independence, to get free from Saudi oil dependency.

While shuffling through our Bureaucrat Beat library we came upon a philosophical work in which it was stated, “You can not achieve peace with war.” Something to meditate on in our windowless newsroom.

The Bureaucrat Beat newsroom was hoodwinked by an internet site and email on the so-called Stella Awards. Now, they are real, but some person, clearly with not enough to do, has also circulated what appears to be a hoax. One of our website readers emailed us to say that the story about the woman who put her motorhome on cruise control and left the wheel to make a sandwich, which, of course, led to an accident, was fabricated.

The official Stella Awards site does say that the motorhome story is not true. That’s a relief. We were deeply disturbed that we think so little of our fellow humans that we could believe people actually think cruise control means they don’t have to really drive the vehicle.

The real Stella Award winner in 2006 was an Oregon man who sued Nike and others for $832 million because he claimed he looks like former basketball star Michael Jordan and has suffered thereby. Wow. He dropped his suits when lawyers told him they would counter sue if he persisted.

On to serious self-defense. The manufacturers of the taser – you know the electronic thing police use to drop suspects to their knees – say they will come out with a designer taster that consumers can buy for $350. Reports say the C2, as it’s called, will drop bad guys with just as much oomph as the police kind.

Manufacturers speculate that women will add the C2 to their purses. So, the unit will come in a variety of colors, including pink. Law enforcement may oppose the whole thing. Can’t you imagine the tasers in domestic violence?

Good grief. Talk about not achieving peace with war.

This is Benett Kessler signing off for Bureaucrat Beat. Remember, we are interested in what you have to say about our lives in the Eastern Sierra and beyond.

We work to provide daily news to all of the Eastern Sierra, in the tradition of Eastern Sierra News Service and the Sierra Wave. We bring you daily happenings, local politics, crime, government dealings and fun stuff. Please contact us.
View all posts by News Staff →
Housing Foreclosures and West Nile Virus?
Zaca Smoke Returns to the Eastern Sierra