The wrangle in Mammoth Lakes over the Wildlife Subcommittee and whether the group should meet in open on the bear issue revealed that others, outside the Eastern Sierra, watch what we do.

Richard McKee from a group called Californians Aware sent a terse letter to the Town Council, with copies to local media. 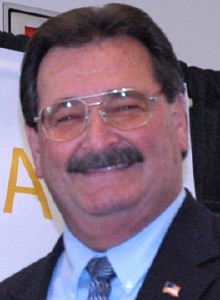 McKee is a director and past-president of CalAware, a Brown Act watchdog group. McKee read in one of our stories that we had contacted the California First Amendment coalition for an opinion on the open status of the Subcommittee. McKee had been involved in that group, too. His letter to the Town Council was headed “Brown Act Demand for Correction.” McKee said the letter was an example of those they “typically send to public agencies when they violate open government laws.”

The letter stated that “Without question, the Wildlife Subcommittee is a legislative body and therefore subject to the Brown Act. Excluding the public from the Wildlife Subcommittee meetings,” he wrote, “is a violation of the people’s constitutionally protected right to be present and involved in the decision making of its local legislative bodies.”

CalAware demanded that the Town Council confirm the openness of the Subcommittee. Turns out the Town did figure that out before they received McKee’s letter. Again, good to know the public of the Eastern Sierra has its back covered by those who care about our rights. By the way, when he’s not into defending open government, Mr. McKee works as a professor of chemistry at Pasadena City College. 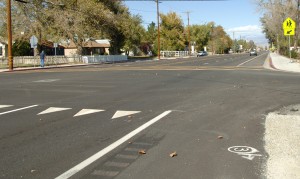 On to paintings on our pavement. Some wish Caltrans would try a more open approach to informing the public about street markings. Stan Smith of Bishop has wondered for some time about the painted triangles that have begun to show up in front of some crosswalks on Highway 395 through our towns. Caltrans said that they are “Crosswalk Enhancement Triangles.” In a press release, possibly prompted by Stan’s question, Caltrans Director Tom Hallenbeck says that as projects are completed in communities, Caltrans has made improvements to pedestrian safety – signs and a new row of triangle shaped markings that face a driver and show where to stop in advance of a marked crosswalk when someone walks through them. There you go, Stan.

The Virginia Department of Transportation was not so exacting about things. Seems the VDOT blushed recently after misspelling the name of former President Ronald Regan. A sign on the interstate listed Reagen National Airport with 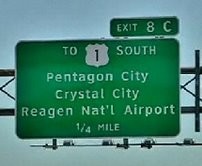 Reagan spelled R-e-a-g-e-n. Wrong! Where are the Grammar Nazis when you need them? Probably terribly busy elsewhere!!!

One more note from Stan Smith. Stan swears that when he picked up his office phone October 15th at 2pm, Verizon was using it to make arrangements for installing somebody’s phones in the neighborhood. That’s what he heard. Smith said he asked them “vehemently to get off my phone line.” No apology or explanation from Verizon. Any ideas, anyone?

Someone dropped off an idea in the Newsroom the other day. Their note said that local county workers, when negotiating for pay raises, should remember that many of the citizens who fund them are either taking pay cuts or losing jobs.

On a completely different note – a Los Angeles Times story told about a new bill to help fund use of storm water. The lead was the fascinating part. It says, “During an average wet season, the City of Los Angeles sends 100 million gallons of storm water into the Pacific each day.” Wow. How about they start to use that and leave more of our water alone.

Hey, even pigs could figure that out. According to a study at Cambridge University, pigs performed rather well in a skills test. The scientists set up a scenario in which food was only visible in a mirror, while a fan swished the food scent away from the porkers. Seven out of eight pigs took less than a minute to learn how to use the mirror to find the food. Scientists concluded that pigs are “keenly aware of what is happening around them” and so more care should be devoted to designing porcine environments. Pig art can only be right around the corner.

We work to provide daily news to all of the Eastern Sierra, in the tradition of Eastern Sierra News Service and the Sierra Wave. We bring you daily happenings, local politics, crime, government dealings and fun stuff. Please contact us.
View all posts by News Staff →
Dial-A-Ride Limitations in Mammoth
“Save Klondike” Thanks Bishop City Council