So, here we are – trapped in the Bureaucrat Beat newsroom. Day two of Caltrans block on our driveway. You know, the Granite Construction sub-contractor told us we couldn’t go in or out of the driveway for three days while they slapped down concrete, etc. So, we decided to make the best of it and explore new things. 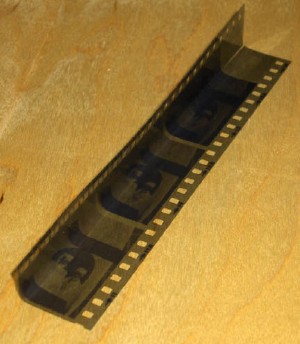 We’ve already flipped through our old film negatives. Lots of news stories covered. We gaze outside, and see the heavy equipment lurch back and forth. We reach for the film negatives again. The past feels better, sort of. Here’s the photo of the day DWP installed water meters in the Owens Valley. That was a long time ago. Word went around that the then-DWP general manager did it to punish the people who had turned down a water agreement. Before that folks paid a flat rate and sat by and watched the water flow down the aqueduct.

Some folks poured cement in the meters. Another one pulled a gun on a DWP worker. It was a kind of turning point, and it hurt people to be punished.

Speaking of punishment. We just ran into the negatives of two murder cases in Inyo. Back in the 70s, lots more killing seemed to go on. Out in remote areas, guns went off and people died. The suspects went to prison. We sat in the courtrooms and took notes. Outside, we snapped pictures of the guilty in chains and orange suits.

Speaking of orange, is that Caltrans out there?

We poured some more coffee and reached for the wheat thins. We found a picture of former Inyo Supervisor Wilma Muth. Highly intelligent public official. We grinned when we remembered the day she turned to fellow board members and said, “Gentlemen, you are a bunch of dumbbells.” Muth won plenty of applause that day.

We turn on CNN news and hear that the California Supreme Court just upheld Proposition 8 which bans same sex marriages. Then we read the story in the LA Times. We learned that the decision was more about the California governmental system and the initiative process that can easily amend the Constitution. Most Supreme Court Justices decided that the Prop. 8 ban on same-sex marriages did not amount to a major revision of the Constitution, but a limited revision since the state’s domestic partnership law remains in place.

They said only the term “marriage” was affected by the election. The justices did lament how easy voters can change the California Constitution, which risks the loss of minority

rights. Justice Ronald George said that it is neither impossible nor improper to limit how voters may change the Constitution. This brings up the fact that California’s free wheeling initiative process has taken away power from elected officials and places freedoms and rights of minorities at risk. Our State officials find themselves hamstrung by initiatives and unable to manage the state budget. We believe that needs to change.

Governor Schwarzenegger has responded to current budget crises with a proposal to make drastic cuts in Health and Human Services, plus another $5.5 billion in cuts in the CalWorks program and community based service programs. Drastic cuts for Med-Cal, SSI/SSP, IHSS, Development Disability services and many more. This will, as we feared, hurt people.

A new emotion now assigned to the DMV. In addition to anger and frustration, you can now feel paranoia when you head over to the Department of Motor Vehicles in four states. The DMVs in Arkansas, Indiana, Nevada and Virginia require that you wipe that smile off your face when they take your picture.

Seems new face-recognition software can match photos if the facial expression remains static. Well, actually, you can smile slightly, but no big, fat grins! We bet California will demand this new rule, too.

Some in Mammoth Lakes have demanded more than a trash clean-up. Locals there tell us they want a thorough cleansing of the police department. One man said recent reports about police in bar fights brings to mind what Rick Wood said at one Town Council meeting. He told council members that “this government is attempting to privately manage a developing scandal in your own police department whose details are commonly known on the street and which will likely soon spill onto the front pages of our media.”

At the time Wood laid his ominous statement on officials the police chief, town manager and some councilmen said they were clueless.

All of this led us to an article in the LA Times which posed the question “When is a quirk pathological?” Seems a bunch of psychiatrists now have the task to define craziness all over again. They will hammer out a draft of the fifth edition of the American Psychiatric Association’s Diagnostic and Statistical Manual of Mental Disorders. Their work will define normalcy versus off the wall.

The bureaucracy will use the book to define the condition of those who come in contact with the system. Critics don’t want the powers that be to confuse someone having a bad day with official depression. We say, “Right on!” to that. After all, we’ve had our share of gloomy days here in the Bureaucrat Beat Newsroom. After all, We’re trapped in here by Granite Construction and the Caltrans road project outside the newsroom. We pour another cup of coffee to lift our spirits.

We work to provide daily news to all of the Eastern Sierra, in the tradition of Eastern Sierra News Service and the Sierra Wave. We bring you daily happenings, local politics, crime, government dealings and fun stuff. Please contact us.
View all posts by News Staff →
New Guns Laws for Yosemite and Death Valley
Governor Plans to Close Bodie And Tufa Reserve