Fun and games with a little terror thrown in. Mammoth’s Tourism Director said that when she described Mammoth’s Halloween Carnival. We in the Bureaucrat Beat newsroom found it a fairly apt description of life itself.

How about this headline: Ohio Homeless Voters Can List Park Benches as Addresses. This is actually more sad than terror provoking. Seems a judge ruled that park benches are legitimate home addresses for voters. What has happened to America? A great country should provide homes, not benches, for its people.

Now here’s scary news. A news sub-head says, “Tough Times: Congress grew 13% richer in 2007.” Yes, while thousands of citizens lost homes, in part, because Congress failed to regulate Wall St., the collective wealth of congressional members grew a reported 13% leaving them in better shape, says the McClatchy Washington Bureau, than most Americans. Two-thirds of Congress are millionaires, including the two Presidential candidates.

Hey, we do not object to money. Wonderful things can happen with the right ideas and cash to pay for them. We do have a sneaking feeling, however, that the wealthy in Congress may lack the ability to understand the people they represent. Most Americans are not millionaires and they do have very real, scary realities to handle. Do you get that elected representatives?!?

We had wondered earlier if the Eastern Sierra Transit Authority got it that the poor and disabled need bus transit as much as or more than tourists. Turns out that Mammoth Mountain, not ESTA, will provide the Apres Ski Shuttle and Hospitality Shuttle. Some had wondered if these tourist buses would pre-empt transit for the poor. Not so. ESTA Director John Helm did say that the transit authority does coordinate services with the Ski Area and meets with them on a regular basis.

More good transit news today. Next week, John Helm tells us, the fixed route bus in Bishop will start to run constant service with no gaps as there has been. The Red and Blue Routes will run nonstop between 7am and 6pm. That’s good to hear.

Just for the record, ESTA does provide a daytime fixed route, the evening trolley and Dial A Ride in Mammoth Lakes.

For those who wondered what happened to the Eastern California Museum signs on both ends of Independence, Caltrans did take them down in anticipation of the highway widening. Inyo County CAO Kevin Carunchio said that Caltrans approached the County and negotiated funding for new signs – some $50,000. So, no signs for now but bigger, better newer signs on the way for the County Museum.

Back to Mammoth Lakes where Leigh Gaasch makes a public plea:

To Mammoth residents and guests,

My name is Leigh Gaasch and I have lived in Mammoth Lakes since 1977. During this time, I have witnessed significant change (good and bad) effect our community. Two years ago I started getting involved in the growth and development of our town by representing the “working class” people who struggle daily to make ends meet in our community.

There are a significant number of new project’s coming forward at this time, and many developers are striving to get their Neighborhood District Plans (NDP’s) expeditiously approved through the public process. I believe that we, the “people of Mammoth” need to speak up and get involved so our comments and input can be heard.

Mammoth is an ugly town surrounded by beauty, but we can make it a beautiful town inside and out if we speak up and get involved.

Height and density is what developers continue to ask for – more than what the 2007 Mammoth Lakes General Plan approves. Yes we need to continue to move forward in our town, but…as the saying goes “Less is sometimes better!”

I believe that we, the “people of Mammoth” need to speak up and get involved so our comments and input about what we would believe Mammoth should be can be heard.

One way I thought of helping our Mammoth residents and guests have their voice heard, is to get them to answer a few questions about our town that I will present to Town Council during Public Comment on December 3, 2008.

1. What would you like to see the vision of Mammoth Lakes be in the future?

2. Is there anything you would like to see in town that we don’t have now?

3. How can we become a year-round resort?

4. Do you have any concerns about the Town of Mammoth Lakes?

5. Do you have any ideas that address those concerns?

6. Is there anything else that you would like to say to Town Council?

I will collect the completed survey forms from your place of business or residence. You may also email the answers directly to [email protected]

Thank you for your comments. 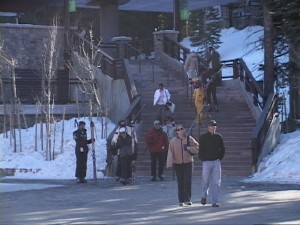 Which reminds us. One of our staff came up with a good quip. He was listening to the Joni Mitchell song, “Pave Paradise and put up a parking lot.” Since the Village at Mammoth is so empty, why not pave over a third of it and, voila! A parking lot!

We work to provide daily news to all of the Eastern Sierra, in the tradition of Eastern Sierra News Service and the Sierra Wave. We bring you daily happenings, local politics, crime, government dealings and fun stuff. Please contact us.
View all posts by News Staff →
Weather Brings Early Ski Hopes for Mammoth
Oak Creek Land Sale Raises Concerns