By News Staff on December 1, 2009 in Bureaucrat Beat

Feel kinda sleepy today? You might be the one in nine American adults who doesn’t get enough sleep on a regular basis. Wow. That’s a lot of people who drag around on half-full, so to speak. We in the Bureaucrat Beat newsroom get plenty of shut-eye. We surveyed each other. We gave up the worry thing and picked unconsciousness after dark. Anyway, recent studies show Americans toss and turn a lot, followed by grumpiness the next day. Something to keep in mind as we navigate the Eastern Sierra.

Maybe the Inyo Supervisors need more sleep. Some, on the other had, say they need to wake up. Anyway, we thought it curious the other day when I wanted to ask a question at a Board meeting and the Chairwoman said no because I was attending the meeting as a news reporter. What?!? Not sure how being a news reporter precludes asking questions in a public forum.

Talk about clogged dialogue. One of the newsroom staff emailed our Congressman Buck McKeon for more explanation on what is supposedly the problem with trying 9/11 suspects in New York court. After all, that’s where the crime occurred. Once again, the Congressman never responded to his email – clearly sent as a news question. Another staff member earlier emailed Congressman McKeon with a specific question on health care. A canned, non-response response came back that didn’t even brush close to the topic. Disappointing.

I bet they would all talk to us if we had the power of veto over their salaries and benefits. We received another email that

said the U.S. Congress and Senate voted themselves pay raises of right around $5,000 a year for 2010 and 2011. At the same time, according to our source, they voted to not give out a Social Security cost of living raise for the same two years. The emailer failed to say that both political parties face the same shame. They have all carried on a narcissistic system that focuses on them, them, them. Good pay, fabulous benefits and perks beyond imagination. So far, not one of them has had the courage to try to stop the pay to play system of campaign contributions.

Closer to home, headlines say the City of Los Angles may face a $1 billion budget gap by 2013. Remember the Water and Power Commissioner who put her foot down in a meeting in Bishop about LA paying for water when they should pump more Owens Valley groundwater? When they’re in real money trouble, guess what they will want? 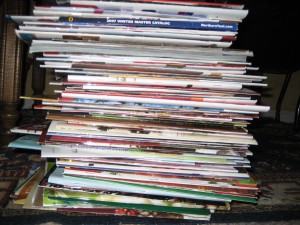 Meanwhile, in the newsroom we continue the calls to catalog companies to beg them to stop sending catalogs!! The Bureaucrat Beat post office box has so much stuff jammed inside we can’t get any real mail. A couple of catalog companies told us it would take 8 weeks to get us off their list. Why so long? we asked. They mumbled something about corporate level. Oh, good grief.

Is it really true that life affects mice and rats the same way it does us people? Scientists say, pretty much. There’s a philosophical revelation in there somewhere, but the story that jumped out at us this week came from Scripps Research Institute in Florida. Researchers there published the information that junk food creates addictive behavior in rats similar to that caused by heroin.
Double good grief.

Seems the scientists went shopping for Ho Hos, pound cake, bacon and cheesecake. The little rodents gorged themselves and fought for more and more like they had a candy bar Jones. Scientists said, “Rats that ate the junk food soon developed compulsive eating habits and became obese.” Anyway, neurological studies revealed that junk food triggered the same centers in the brain as heroin. Draw your own conclusions.

We work to provide daily news to all of the Eastern Sierra, in the tradition of Eastern Sierra News Service and the Sierra Wave. We bring you daily happenings, local politics, crime, government dealings and fun stuff. Please contact us.
View all posts by News Staff →
CHP Explains Tire Chain Check Points
Charges Filed in Lake Mary Bear Shooting