By News Staff on October 5, 2010 in Bureaucrat Beat 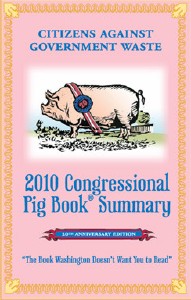 Most of us have no clue what the federal government does with our money. The group, Citizens Against Government Waste try to keep track. They issue annual Pig Books, as they call them. They list pork barrel expenses approved by Congress and the Senate. We will name some of them in this and other Bureaucrat Beats. It seems that with a national debt of more than $13 trillion, our leaders might stop the spending. The debt goes up by a reported $4 billion per day.

The 2010 Congressional Pig Book from Citizens Against Government Waste says that some reforms did take place over earmark expenditures – projects tacked onto bills that go through unnoticed. Even so, the spending goes on and on. According to the Pig Book, the 2010 Defense Appropriations Act contained “35 anonymous projects worth $6 billion.”

The Citizens group says that in their 20-year expose of pork-barrel spending includes nearly $4.5 million for “wood utilization research, $300,000 for Carnegie Hall and $200,000 for the Washington national Opera. The legislators in the areas of gifting would probably say, hey, we needed to give them this money. Again, against the backdrop of the national debt, we question it.

Meanwhile, back in California, news reports say that cities across the state have ignored laws that required the building of affordable homes. Redevelopment agencies have spent hundreds of millions and not built a single unit. We must congratulate Mammoth Lakes Housing for actually building affordable housing units, a number of them.

On to the weather. Though we know it’s tough to predict, scientists have begun to talk openly about La Nina and the potential for a dry year. Take note.

On to a fanciful topic. Good news for “Lord of the Rings” fans. News reports say that after many years of delays, the next chapter of “Lord of the Rings” films may actually happen. Yes, it’s called “The Hobbit.” Production, insiders say, could start in mid-January with air dates in 2012. At last, Middle Earth. 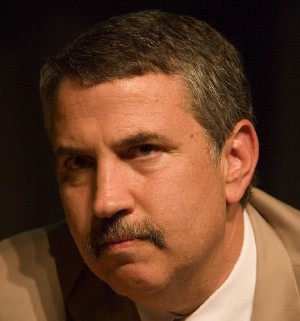 Friedman concludes his column with this:

We like it. We feel weary with the news of government rip offs, off Bell CA leaders who cut police pay while they built up their own. We’re tired of pork barrel spending just because they can. We’re up to here with big money buying votes. Like the song says, “It’s a new day, baby.”

We work to provide daily news to all of the Eastern Sierra, in the tradition of Eastern Sierra News Service and the Sierra Wave. We bring you daily happenings, local politics, crime, government dealings and fun stuff. Please contact us.
View all posts by News Staff →
Three-County Meeting on Digital 395
Crowley Cell Phone Tower Project Moves Ahead