We know this post will further brand us as curmudgeons or worse, but here goes anyway. We do not like it when we go to a drive-up window for food or coffee and the disembodied voice on the other end wants to know “how are you doing today?” Hey, we don’t wish to be rude, but if we were looking for a friend we’d go to match.com. How about this instead: “Hi, what can I get you today?” That’s service. They call it fast food for a reason. We’re tired of phony friendly at some chain stores. Okay. We got that out of our craw.

It may be some time before Mammoth Lakes gets the Administrative Office of the Courts out of its craw. This is something Inyo and Mono have in common. Seems at the groundbreaking of the new $20 million court building in Mammoth the other day mumbling went on behind the scenes. When the State agreed to the new building, the Town tried to work with them on design review. Mammoth has spent years of painstaking work on the look of the Town. The parties involved in the civic center site which includes the new court building had also come up with design principles. The State agreed they would obey the design process. They didn’t.

Some told us that local folks couldn’t even get the State to change the style of door knobs. The AOC came up with a design 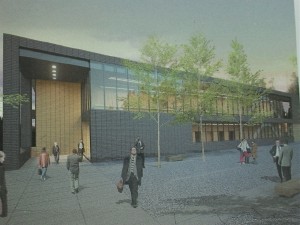 that did not please some on the Town Council or design panel. A Committee including members of the Town Council, Board of Supervisors and local judges, who tried to get the State to reconsider it’s downtown Los Angeles-style design.

Mammoth’s Community Development Director Mark Wardlaw said many thought the design was “inappropriate for Mammoth.” Plus, the State failed to consider energy saving designs and mechanisms. Most of the windows are on the east or north. Wardlaw said the town staff “reached out” to the AOC’s project manager with design and materials suggestions. He ignored them. So, the State spent $20 million on a non-energy saving building of a design that does not fit Mammoth. One more irritation – They won’t hire any local contractors or sub-contractors. Nice job, AOC. Remember these are the same bureaucratic types who now hold the fate of a $30 million court building for Inyo in their hands. How about a little cooperation with the local folks, eh???!!! They pay taxes too.

Here’s another plea for cooperation. Bridgeport resident Kellie Annett wrote to say that she feels the Eastern Sierra Unified School District Superintendent and three board members are destroying things. Kellie wrote, “The firing of teachers and closure of our best and most accredited schools is a travesty, especially when it comes at such a high cost.” Ms. Annett further felt betrayed by the cancellation of a meeting between the County Office of Education and ESUSD to discuss cost-saving measures. The meeting was called off by ESUSD who reportedly did not want the public included in the meeting.

Ms. Annett wrote this: “The cancellation of last night’s meeting only goes to accentuate the fact that communication’ is not something that Mr. Clar4k is interested in having with the rest of us. Catherine Hiatt,” wrote Annett, “and her staff should be greatly commended for their sincere efforts to save our district over $300,000 for the 10/11 school year. She even drove to Bridgeport last evening to be present at the Memorial Hall in case individuals who hadn’t heard about the meeting being cancelled could be advised. Why Mr. Clark is against saving this huge amount of money,” said Annett, “when he has put our district in such a dire situation, would be very interesting to find out.”

And, now a break from all the craziness. The U.S. Postal Service created a commemorative stamp of Katherine Hepburn. A lovely, talented, classy woman. She joins the other stars in the Postal Service’s Legends of Hollywood stamp series. We like that.

Lots of candidates forums and coverage of the local elections, particularly in Mono County. More to come. Some more in Inyo, although we hear there are no forums for an important race – the District 3 supervisor contest in Inyo. Incumbent Bev Brown will face challengers Rick Pucci and Karen Ball Summers. County government faces hard days ahead with lots of powerful pressures on our money and on our environment. We need smart, brave people on the Board of Supervisors.

We work to provide daily news to all of the Eastern Sierra, in the tradition of Eastern Sierra News Service and the Sierra Wave. We bring you daily happenings, local politics, crime, government dealings and fun stuff. Please contact us.
View all posts by News Staff →
New Court for Mammoth Lakes
Animal Planet Orders More Episodes of Bear Whisperer