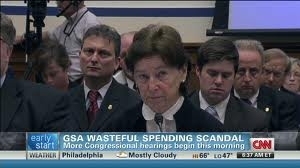 There’s a formula nearly as famous as E = MC2.  It’s Power plus Money = Scandal.  Recent cases in point, of course, the Agency Gone Wild, better known as the General Services Administration.  You’ve heard they spent more than a million of taxpayers’ dollars on parties and more parties.  At one trip they even hired a mind-reader to do sessions with the GSA junketeers. Wonder if the psychic clued them in that they were about to be busted.

Talk about busted!!! How about those Secret Service characters – The LA Times reported none of the 11 agents who allegedly brought prostitutes to their hotel rooms in Caragena had “weapons, radios, schedules or other potentially sensitive material in their rooms.”  Whew!  What a relief. Apparently, all they had in their rooms was bad judgment.  Yikes.  The article also quoted a former Secret Service official as saying that “boozy, rowdy wheels up parties after the president has departed are a fixture of Secret Service life.  But, officials said before the President arrives such behavior is totally unacceptable.  Hey, maybe the guys got before and after mixed up.

There’s no mix-up in how bad things are in the Town of Mammoth Lakes – a crumbling government teetering on the brink of bankruptcy, LADWP grabbing for the Town’s water, major layoffs at the Ski Area this winter and other tragedies.  The latest gripe – really bad internet service.  If this helps, Mammoth, you are not alone.  Recent news quoted an FCC report that showed the US ranks 12th for broadband 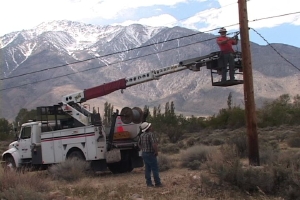 service behind South Korea, Iceland, Sweden, Norway, the Netherlands, Denmark, Finland, Luxembourg, Britain, Canada and Germany.  Prices are lower overseas too.  So, what’s up with this?  America, unlike foreign countries, failed to encourage competition and failed to require that broadband capacity, actual fiber and wires, be shared by competing service providers.

As it is, Verizon and AT&T have a lock on broadband with no competitive push to expand beyond their own profit desires.  It’s the American Way, you know.  Then, this week a milk truck snagged a fiber optic line which took out all phone and internet services in Mono County.  Good grief!

There are other, oddball differences between the US another countries.  For instance, last week a group of actors and artists went to Congress to speak up for funding for the arts.  In italy, artists support the Casoria Contemporary Art Museum in Naples where the director says he will set fire to famous artworks each week the government fails to support the museum.   Antonio Manfredi, the arts director, is quoted as saying, “Until concrete action has been implemented to safeguard the museum, we shall continue to burn the works in our permanent collection.” Apparently, irony has escaped the notice of Manfredi.

It wasn’t exactly irony when the president of the California Fish and Game Commission reportedly violated state gift limits when he accepted a free guided cougar hunt in Idaho.  Whoops. The game regulation guy, according to the LA Times, paid for the $6800 hunt after media outlets reported his trip.  The California Fair Political Practices Commission issued a warning letter.  State law bans gifts of more than $420 from certain sources.  For Fish and Game, the no-nos include hunting clubs.

Some folks say, yes-yes! to the idea of Mammoth Brewing Company relocating to Inyo County.  There was recently released old news that the company might do that.  We in the Bureaucrat Beat Newsroom thought the deserted Winnedumah Hotel in downtown Independence would make a swell location for the growing brewery which has not found a bigger home in Mammoth Lakes.

Finally, a Bishop woman emailed us to report a nightmare.  We can relate to that – morning brings more than a few.  Anyway, she said that she wanted people in the Eastern Sierra to be aware of a man who calls and says, “You have earned money from Walmart or CVS and he needs to confirm your name and address.”  Ok.  Suspicious.  The woman said that once he gets your information, he threatens you to give him money knowing where you live.  This Bishop woman said, “This is pretty bad and scary.”  She and her husband went to police who said others have received these calls.  The main message – don’t give unknown people who call you ANY information.

One Response to Bureaucrat Beat: party ’til you drop; can you hear me now? and scary calls