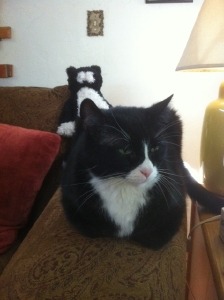 Tuxedo, the newsroom cat, ponders the oddities of humans.

Some scary news these days – right out of George Orwell kind of scary.  Okay.  We know it’s probably a good thing to have microchips imbedded in your pets so if they run away someone can bring them home, but there’s something about the phrase “mandatory microchipping of pets” that gives us in the Bureaucrat Beat Newsroom the heebeejeebies.

Tuxedo, the newsroom cat, has categorically refused microchips.  He feels it’s dehumanizing.  Wait a minute, he’s a cat???  Well, anyway, we know how he feels.
Democratic State Senator Ted Lieu introduced a bill that requires owners of animals adopted or impounded to implant an identifying microchip upon the animal’s release.

Senator Lieu says the microchips in the fur will save California $300 million a year.  He says California impounds 1 million dogs and cats every year and pays to euthanize half of them.  He believes the computer chips will save Fluffy and lots of money.  The State needs to clone ICARE if they want to really solve problems.  We’ve hired a therapist to convince Tuxedo he needs a microchip.

Elsewhere in our state’s capitol, Governor Brown has issued an executive order to purge unnecessary vehicles from the state’s fleet.  He slashed 3800 vehicles which will save a reported $11.4 million next year and raise another $5 million at auction.  Hey, it all adds up.    Governor Brown has cut spending in his own office by more than 25% and has called on other departments to follow.  Brown has ordered state agencies and departments to recover millions of dollars in uncollected salary and travel advances; ban spending tax dollars on free giveaway and gift items; eliminate 30,000 cell phones and freeze hiring across state government.  It’s a start.  Just think of the years of waste.  No, don’t.

In fact, it’s time for a musical break from this heavy news.  Had dinner at the Thai Thai Restaurant at Bishop Airport last Friday.  It was packed.  Locals and whoever finds it really dig the place.  Plus, on Fridays, live dinner music.  We found Patrick Powell and his golden sax playing beautiful tunes.  Pat says he performs for senior citizens and local churches and other gigs.  “I just like to make people happy,” said Pat.  We need more like Pat.

Back to the scary stuff.  Seems Goldman Sachs Group, the mega Wall Street bank has opened up a new division.  Goldman has developed what the LA Times describes as a “stealthy Washington lobbying operation.”  It’s very near the Capitol.  The Goldman lobbyists spent $4.6 million lobbying the federal government last year.  They do not, we mean really do not, want new banking regulations.  As far as we can tell, if Congress fails to slap new rules on Wall Street, we could sail right back to the lip of the abyss any time now.  Of course, with $4.6 million greasing their palms, the dreary pit of disaster doesn’t seem so bad to Congress.  Quick, where’s the Pepto Bismol.

Then there are the Nigerian scammers.  Unbelievable!  However, they apparently find some suckers who go for their goofy stories.  The one now in circulation uses intimidation instead of schmoozing.  Would you believe, they sent an email, they said, from the FBI.  Yeah, right.  Anyway, the Email contact person is a Reverend who is the principle legal advisor for Homeland Security.  They spelled principle wrong in the email.  Another clue.  So, anyway, the email says you’d better contact this guy “or else I will have an agent come visit you at home for questioning.”  The whole thing is about the recipient getting a “Clearance Certificate.”  Then they want you to find out how to send a fee for your certificate.  And, they’ll give you your money back if you check out okay.

Good grief.  It’s really a bunch of gibberish spiced up with official sounding words designed to separate you from your money.  Oh, yeah, copies of the email went to the U.S. Supreme Court and every other court they could think of.

While we speak of the absurd, how about this?  We called the California Attorney General’s Office yesterday to find out about the AG’s medical marijuana guidelines.  I asked for the press office phone number.  The woman who answered the phone in the AG’s office said, “I’m not allowed to give you that number.  I can only transfer you.”  Say what???!!  Not allowed to give a reporter a public phone number.  Good grief, again.
Before we’re forced to say Good Grief again, we’ll sign off.

With that, This is Benett Kessler signing off for Bureaucrat Beat where we await your word on our lives in the Eastern Sierra and beyond.

Bennett you really hit the nail on the head what this world needs are a lot more PAT POWELL’s. What a super person.