Wow. What a week in the Eastern Sierra. We had no revolution, no crowds in the center of town shaking their fists and no armed insurrection. We did have questions about cronyism,

dealing with DWP and fears of no state money for counties. In the City of Bell where elected and hired officials apparently ripped off taxpayers for possibly millions, the people elected a whole new city council. Best of luck to Bell. One important lesson there for us – pay attention to your government officials and what they do.

Miscellaneous news notes – Sam Nazarian, owner of Hyde Lounges in Southern California and Mammoth, is under investigation. According to NBC, some of his night clubs have liquor licenses as if they were restaurants but it’s alleged that they serve no food. Anyway, we checked in with Mammoth Police Chief Dan Watson on the local Hyde Lounge. No such problems here. During our conversation, the Chief said that the Alcohol Beverage Control folks did come to Mammoth Lakes a couple of weeks ago. They looked for sales to minors and serving to intoxicated persons. Apparently no violations found.

On the photo scene, our pal Dave Hodge won the bid for photographic work at Bishop School District. Dave has quite the eye for images. We used to enjoy his work here at the Sierra Wave. Dave says he’ll look for temporary help next fall. Check it out with Roving Photo. 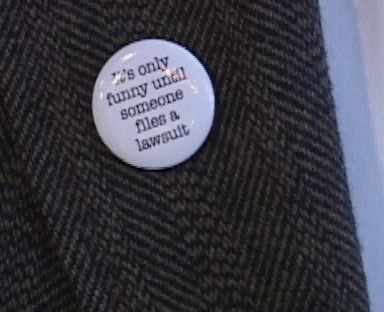 Ran into another pal this week, attorney Paul Rudder. He was sporting a new lapel button that says, “It’s only funny until someone files a lawsuit.” True enough. His other button said, “I think, therefore I am not Glenn Beck.” We like that one too. Rudder, a long-time local, has insights into Mammoth. He’s also very witty and even likes lawyer jokes.

This is no joke. Talk in Washington, D.C. about GOP budget wishes like no funding for National Public Radio. In spite of the thoughtless comments an NPR fundraiser made on a hidden camera, public radio serves a purpose. It’s not corporate controlled news and drama. Other proposed cuts – $1.3 billion from community health centers, low income health care, food and health care assistance to pregnant women, new mothers and children; cuts in headstart; $1.6 billion from the National Institutes of health which would devastate cancer research and other disease research.

How about we get out of the wars we don’t belong which would save billions, make defense cuts that even the defense secretary and Senator John McCain want, and all of the endless pork barrel baloney.

Warren Buffett has advice to help all of us. Billionaire Buffett is quoted in the Los Angeles Times that he wants Americans to be optimistic about the country’s future but wary about borrowing money and the games public companies play with profit numbers. Buffett believes a housing recovery will unfold within the year. Okay, Warren. No relation to Jimmy.

Here’s another suggestion for problem solving. Stan Smith came up with the “Just for Being Here” tax. He first suggested it for Mammoth Lakes, stuck with a $30 million court judgment and other problems. Stan says $10 per person would really rake in the bucks. As his mind expanded, Stan applied the new tax to the state of California – the guys with the reallllllllllly big money problems. The same $10 per person for living or visiting in California. Wow. Think of the money???!!! As the Republicans in Sacramento have said, we need to stop spending and reform pensions before we raise more money. Hey, guys, I’m afraid we have to do both.

We work to provide daily news to all of the Eastern Sierra, in the tradition of Eastern Sierra News Service and the Sierra Wave. We bring you daily happenings, local politics, crime, government dealings and fun stuff. Please contact us.
View all posts by News Staff →
Inyo Search and Rescue team tests skills in Alabama Hills
Mammoth Winter Biathlon needs volunteers, participants