A top local official commented the other day that it’s time to get rid of partisanship. No more Democrat or Republican 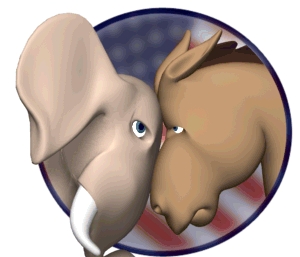 elected officials. The non-stop bickering of the grade school kind in Sacramento and Washington has left a thoroughly disgusted public aghast at the immaturity and ineffectiveness of our legislators. As the local official said, “Two people can’t walk into a room without disagreement.” In short, they have no clue how their failure to run government hurts people and will hurt them more. All they care about is making each other look bad – for power and money.

We can site some dumb moves. State Senator Bob Dutton publicly whined about Governor Brown’s wife who he said yelled at him. The Republicans demonstrated on the Capitol steps with a bobble head of Governor Brown and a report card on Brown’s performance. All F’s, of course. Then Democrats compared Republicans’ budget ideas to belief in unicorns. Republicans came back with nasty remarks about unicorn assertions. Helllllllooooooo! This is worse than childish. At least children try to grow up. These people act as if they are locked in mortal combat to make each other look bad. We hear more and more that people want a new political system. One in which people who want to serve the public run for election – no more political parties!!!!!!

Clueless. That’s what some now say about Congress when it comes to the recent brush with a shutdown. Federal agencies here in the Eastern Sierra basically worked double time the week before the deadline to prepare for closure. Some of them checked out a CNN running report on Congressional actions up to the midnight deadline. One local bureaucrat said he was disgusted by the cheerful response of Senator John Boehner who told reporters he was a “happy warrior” and the “glass remains half full.” The local man commented that Boehner, who usually cries big tears at the drop of a hat, was way too happy considering the fear he and the others placed on federal employees.

Clueless or maybe just socieopathic. They just don’t seem to care about the rest of us out here. They have absolute power to collect as much money, raw dominance and fame as they want. We heard a scary story the other day. Seems a man who served briefly in Congress back in the 70s didn’t want to go beyond one term because “everything back there is so corrupt” That was more than 40 years ago. Imagine the depth of venality now!

We in the Bureaucrat Beat Newsroom are reminded of the story of Dorian Gray. Just saw a new film version of the classic account of depravity. You know, the evil ugliness of the degenerate Gray showed up on a painted portrait. Very creepy. We think all of the members of Congress should have portraits painted and see what perverted pictures surface. They would all go for it, don’t you know, due to egotistical self-puffery.

No delight in navigation of voicemail systems, particularly the ones government agencies use. We feel that to stimulate the economy and to comfort the prickly ire of the public, agencies should ditch their voicemail systems and hire an operator to talk to the harried citizens in search of information.

On a completely different note, we began to wonder the other day during a coffee and wheat thins break if childhood toys either lead to bureaucrats or if future bureaucrats pick certain toys. Tinker toys came to mind. So did Lincoln logs. Of course, perhaps some are born to think inside the box, never to peer out.

Hey, some of us dallied with tinker toys for a bit. Somehow, dressing up like Superman and the Lone Ranger seemed more fun.

We work to provide daily news to all of the Eastern Sierra, in the tradition of Eastern Sierra News Service and the Sierra Wave. We bring you daily happenings, local politics, crime, government dealings and fun stuff. Please contact us.
View all posts by News Staff →
LADWP grants easement to Inyo for Bishop Airport
Inyo Sheriff supports ATV trail pilot project