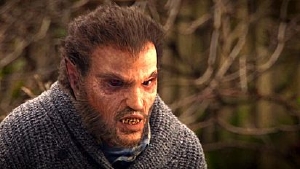 One of the charmers from NBC's "Grimm"

The characters on the NBC TV series, “Grimm” are not exactly what you would call bureaucratic.  Yikes!  Talk about hair raisers.  From the police captain who appears to be the Dark Lord to the hairy array of creatures who one minute look like fairly normal humans and the next, wow, they morph into “Wesen”, German for creatures. You may have seen some of them at Vons.
Blutbaden (part-wolf), Hexenbiest (witch-like), Jagerbar (bear-like).  You get the picture.  Then, there’s the Grimm, himself, a quite handsome police detective, who sees all the dark sides of humans and “handles” them.

We in the Bureaucrat Beat Newsroom have our DVR’s set for “Grimm”.  We’re picking up clues on the animalistic.  After all, it is the wild side that gets us in trouble and creates bureaucratic controls. If we were, well, more human, we might not need all these rules to keep us well-behaved darlings.

Couldn’t believe the rat-a-tat of comments on our website over distracted driver month! Yikes. Talk about hitting a nerve! Some demanded that we remain free to whip out our cell phones or do whatever, whenever we like, at 65 miles per hour.  As CHP Captain Andrea Witmer told the Bishop City Council – when she learned to fly a plane, she concentrated on flying.  When you’re in a car, she said, concentrate on driving.  But, then, we humans sometimes slide into a slippery state of mind and wake up in a sticky wicket.

Hey, that’s what happened on Wall St.  Those deal-doers slipped into the nether world of obscenely expanding profits and never came out until it all fell down.  Rules.  Regulations.

What?  Would you prefer living in China where mothers of newborns are so afraid of the content of baby formula that they insist on buying American products??  No rules.  No regulations.  Except, of course, the kind that put political rebels in Chinese prison.

The Los Angeles Department of Water and Power has to quit trying to kid us.  They like to say that their policy is “not to get all the water they can get.”  But, come on.  We all know that’s the policy, and in fact, DWP would probably be derelict in its duty not to get all the water it can get.  Just knock off the phony stuff.  Now, they’re saying their intent is not to get all of Mammoth’s water.  Oh, really, then why did they file a suit with that as the endgame?  Oh, okay.  I guess we could say you don’t really want Mammoth’s water.  You just want the water district to find you another source and pay for it – forever!  It would cost $2 million a year, roughly.  Hey, maybe MLLA and LADWP have 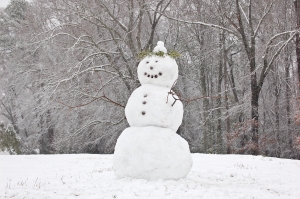 Dose LA own all the snow?

been talking.  They think it’s in vogue to squeeze the resort town until millions fall out.

Upon hearing of LADWP’s insistence that they own Mammoth’s water, John Heston, Jr. (son or our esteemed founder) said, “If I make a snowman, do I have to check with DWP first?” Go Heston!  He’s retired Green Beret.  Not to be messed with.

Our website is fun. The comment section – a real lesson in human relations and far out opinions. Also fun is the fact that people from all over join in the virtual community.  Remember Paul Morrisson?  He was the Inyo County Administrator in the 80s and also an assistant to former Administrator Brent Wallace who recently died.  Morrisson thought we had gone soft on news until he read Bureaucrat Beat.

Paul moved to Banning after he retired, lives in a gated community, plays golf, travels (all over the world)  with his partner, Barbara. He still visits the Eastern Sierra.  Morrisson said he does not “miss county government, but I do miss all my county government  friends,” he said. Morrisson occasionally reads agendas and minutes of Board of Supervisor meetings, and, yes, the same issues and problems continue through the years – unresolved.  He noted that 25 years ago Inyo County wanted to build a county office center in Bishop.  The beat goes on.

Finally, poor Tombstone, Arizona.  A news article shared by one of our readers says the Forest Service has denied the town the right to fix its water system, severely damaged by the massive Monument wildfire last year. The Forest Service says no heavy equipment in a wilderness area even though Tombstone established its water rights way before the Wilderness Act.  Have the Forest Service and DWP been hobnobbing?

Bureaucrats, unfamiliar with the shoot-out at OK Corral, now face a lawsuit from the Goldwater Institute which said the “federal bureaucrats are refusing to allow Tombstone to unearth its springs and restore its waterlines unless they jump through a lengthy permitting process that will require the city to use horses and hand tools to remove boulders the size of Volkswagens.”  The saddest story of all – when bureaucracy trumps common sense.

With that, this is Benett Kessler signing off for Bureaucrat Beat where we await your words on our lives in the Eastern Sierra and beyond.

You all have very good points but I would say that 99% of folks out there (minus perhaps county, city, state, fed, etc workers who have have the gravy benefits) would love to believe that the Buffet idea would work but in the end unless we vote “Regular Joe’s” in this will never take place. Trust me, I would love this but you feel like you’re fighting a club weilding Goliath with a twig. I know we have a voice (at least that’s what they would like us to believe) but the Atty’s run this country and have everything set in the favor of the elitist’s. If we can have the middle left to the middle right agree in whole then who knows…… maybe some chance some day. I’d like to believe!!!!

I frequently write to my elected “representatives” about reforming the system. I think this would be the most effective way to communicate to our government about what we on the low steps of the food chain see as wrong or irresponsible. I usually get a standard form letter in response but I’m noticing that the more often I write, some letters seems to become less standardized making me think that some are actually being read and perhaps considered. I would encourage everyone to send a letter to each of their reps telling them what they see is wrong with the system and perhaps a suggestion for fixing it. Quoting economists, poets, criminals or journalists on a website blog makes oneself feel good but what good does it really do?

I sent the Buffett proposal directly to the White House at:

Whispering into a hurricane but what the heck….

Warren Buffett, in a recent interview with CNBC, offers one of the
best quotes about the debt ceiling:

“I could end the deficit in 5 minutes,” he told CNBC. “You just
pass a law that says that anytime there is a deficit of more
than 3% of GDP, all sitting members of Congress are ineligible
for re-election.

The 26th amendment (granting the right to vote for 18 year-olds)
took only 3 months & 8 days to be ratified! Why? Simple!
The people demanded it. That was in 1971 – before computers, e-mail,
cell phones, etc.

Of the 27 amendments to the Constitution, seven (7) took one (1) year
or less to become the law of the land – all because of public pressure.

Warren Buffet is asking each addressee to forward this email to
a minimum of twenty people on their address list; in turn ask
each of those to do likewise.

In three days, most people in The United States of America will
have the message. This is one idea that really should be passed
around.

A Congressman/woman collects a salary while in office and receives no
pay when they’re out of office.

3. Congress can purchase their own retirement plan, just as all
Americans do.

4. Congress will no longer vote themselves a pay raise.
Congressional pay will rise by the lower of CPI or 3%.

6. Congress must equally abide by all laws they impose on the
American people.

Congress made all these contracts for themselves. Serving in
Congress is an honor, not a career. The Founding Fathers
envisioned citizen legislators, so ours should serve their
term(s), then go home and back to work.

If each person contacts a minimum of twenty people then it will
only take three days for most people (in the U.S. ) to receive
the message. Don’t you think it’s time?

THIS IS HOW YOU FIX CONGRESS!

Thanks for putting this back out there.

That is all right on Ken .. but as long as Congress feel they’re all above everyone else, it won’t happen .. they love all their bennies very much.
Public pressure, I feel, in this case will not sway them .. The elitism is well rooted in them.
As long as we have greed, this sort of thing will continue, so there you have it … greed is part of human nature, It is a learned thing though .. because if you watch little children who have not been exposed to it, they have no greed in their hearts until it is shown them.