Why do you suppose every single community in Inyo-Mono despises Caltrans for their own particular reasons? After our own go around through the bureaucracy grinder of Catch 22 regulations, we can say this – no governmental agency should allow engineers to direct and negotiate projects with citizens. In each community, engineers have bullied their way through projects with no regard for the people who live along Highway 395.

Engineers have very definite skills. Human relations is not one of them, generally speaking. There are always exceptions. Even the California Transportation Commission saw the folly of sidewalks to nowhere in the tiny town of Independence with the sacrifice of 100 trees.

All we can offer to the Caltrans bureaucrats is the poem, Trees, by Alfred Joyce Kilmer in the late 1800s. It goes like this:

I think that I shall never see
A poem lovely as a tree.

A tree whose hungry mouth is prest
Against the earth’s sweet flowing breast;

A tree that looks at God all day,
And lifts her leafy arms to pray;

A tree that may in Summer wear
A nest of robins in her hair;

Upon whose bosom snow has lain;
Who intimately lives with rain.

Poems are made by fools like me,
But only God can make a tree.

From poetry, we will move on to Chinese philosophy. Every corporate big wig claims a copy of The Art of War by Sun Tzu – brilliant strategies on how to win.

Another Chinese genius, Confucius, wrote the I Ching. That writing offers advice to government. The I Ching says “Only when there is this invisible bond between government and people, so that the people are sheltered by their government as groundwater is sheltered by the earth, is it possible to wage a victorious war.” Or, do much of anything else as a society.

Government has to respect and, yes, even love its people. All of its people. Is it just us in the Bureaucrat Beat newsroom or do you feel that some of our local government officials don’t really like us if we disagree with them. Barely concealed contempt, really.

Many look to the new officials in Washington with hope that the bond will form with all people, that government will shelter them and not steal from them.

At the Mammoth Town Council Wednesday night, a former councilman and local attorney kind of let the current Council have it on some of the same points we’ve just mentioned. 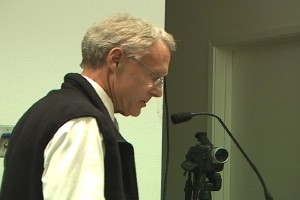 Here is what Rick Wood had to say to the Mammoth Town Council:

“Like many others, I was struck by the extraordinary new tone on display in Washington and around the country yesterday, and in particular, the theme that we as a country have a common purpose. I could not help but compare that with what I see in Mammoth Lakes, which I would describe as a constant political fight for turf and power which has left behind our belief in the ideal of unity, common purpose and community.

This Council has presided over approval of a general plan amendment during which fundamental principles underlying the general plan adopted only 18 months ago have been put aside. That does not bother me as much as the fact that the process failed to produce consensus on the important social and quality of life issues which were presented by the proposed amendment. There should be a clash of ideas. However, the principle of compromise leads to consensus. To my dismay, this council ahs failed to work through a compromise that I know from experience could have been obtained in order to provide direction to the developer and those who will oppose the project. I submit that you owe that to the community, without enduring even more public process.

This government is attempting to privately manage a developing scandal in your own police department whose details are commonly known on the street and which will likely soon spill onto the front pages of our media. I submit to you that this Council and your staff have an obligation to make transparent those things which are going on inside of government.

This Council has a budget crisis of unprecedented proportion. The concern expressed by Rusty Gregory two years ago was ignored. The alarm sounded by this citizen one year ago was met with one of you chiding me for talking us into a recession and ignoring my ten-point plan for immediate action. Your solution to the recent $ million budget shortfall completely ignored the public promise you made nearly a year ago to devise a plan to pay back the $5.6 million which you borrowed last year to resolve that budget shortfall. Now you face another $1 million shortfall without many tools with which to cover it.

My unsolicited advice to the budget subcommittee is as follows:

First, define your role not as examiners of line-items, but as stewards over nothing less than a reorganization of this government.

Second, break the shackles placed on you by your own staff who have failed you and this community by making bad bets and not being held accountable for them.

Third, bring transparency to the process by reaching out to the six smartest people you know to help you and invite another ten people from a broad spectrum of this community to tell you how to make fundamental change during these tough times.

Unity, common purpose and community. These are ideals that are worth pursuing. When that is understood, this Council will finally accomplish what it was elected to do.

More about that invisible bond needed between government and its people. How about it?

We work to provide daily news to all of the Eastern Sierra, in the tradition of Eastern Sierra News Service and the Sierra Wave. We bring you daily happenings, local politics, crime, government dealings and fun stuff. Please contact us.
View all posts by News Staff →
USFS Approves Mammoth Mountain Ski Back Trail
KOLO, Channel 8, Still Airs on Cable in Inyo