By News Staff on September 3, 2010 in Bureaucrat Beat

The Town of Mammoth did something no other local government has done in the Eastern Sierra. They basically fire people – long-time managers and others. Councilman Rick Wood said the interesting thing – it’s about a “change of culture.” It’s not 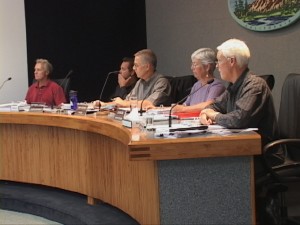 about a self-perpetuating bureaucracy, he said. It’s about what’s best for public service.

Any way you cut it, the dismissals add up to heartbreak for several individuals and their families, not to mention their friends. We can say one thing – it pays government workers to keep their eyes on the sparrow, so to speak, and make sure public good comes first. It’s tough, but may protect against the proverbial slap in the face.

Another indicator of the political acceptance of what the Town Council did – just two citizens objected. No major public outcry.

Some people in Inyo County would like to comment, or maybe laugh, about the reports that state legislators “grilled” the Administrative Office of the Courts about some of their expenditures. Talk about forgetting the public!! A report said the AOC spent $14,000 to paint a single restroom. $2,600 to replace five smoke detectors and (here’s the best one) $149 for one worker to escort another through a courthouse. Wooo-hooo! We in the Bureaucrat Beat newsroom would like to apply for that job.

AOC Director William Vickrey argued that “inadequate billing codes most likely led to the AOC being over-billed for the most basic of services.” Darn those billing codes! Closer to our issues here, the AOC now fends off attacks that their new courthouse buildings cost way too much. We wondered about that. They want to spend more than $30 million in Inyo and will spend more than $20 million in Mono.

A recent news report said that Kern County judges feel buildings proposed for their area cost too much – $42 million for one court structure. More than $1,000 per square foot. Trouble with all this – more people have no jobs and have to fear for no food. 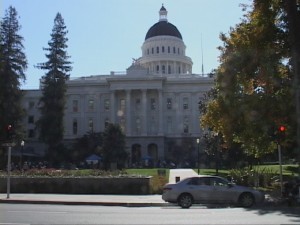 But, have no fear, you can still put your food in a plastic bag. The California Legislature dithered over a vote to ban the troublesome bags, but said, no might mean lost jobs. News reports said that the American Chemical Council that profits from plastic bag production, spent a quarter of a million in six months, hired five lobby firms and bought off our lovely legislators. Both Democrats and Republicans accepted campaign contributions. We will vote for a part-time legislature if someone will put it on the ballot.

Meanwhile, more disturbing news at grocery stores. Vons corporate headquarters, not local Vons people, demanded a stop to donations of milk and eggs to Inyo-Mono Advocates for Community Action and the Salvation Army. They claim the egg salmonella scare caused the change. But what about milk? Not only that, but there are legal precedents that donated food carries no liability. Our local people who could not afford those products will now not have them. Are there other sources out there who might make donations?

Speaking of the egg problem, the LA Times reported that finally federal officials investigated two Iowa mega farms whose eggs were bad. They found “filthy conditions, including chickens and rodents crawling up massive manure piles and flies and maggots too numerous to count.” We in the Bureaucrat Beat Newsroom wonder where the Food and Drug Administration inspectors have been? On a coffee break for the last two decades? We can live with bureaucrats if they at least do what we think they’re doing.

We work to provide daily news to all of the Eastern Sierra, in the tradition of Eastern Sierra News Service and the Sierra Wave. We bring you daily happenings, local politics, crime, government dealings and fun stuff. Please contact us.
View all posts by News Staff →
Police Arrest Intoxicated Man with Knives at College Dorm
Action for a Better Mammoth Lakes Main Street