Let's start out today with a slogan from a newspaper in Bishop back in the late 1800s and early 1900s. It was called the Owens Valley Herald. On the masthead of the paper was the slogan: "An Independent Weekly Journal that Chips the Block of Publicity Without Caring Where the Chips Fall." 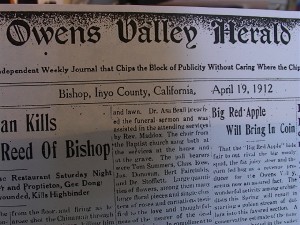 Right on, fellow journalists. News reporters back then had the style we in the Bureaucrat Beat newsroom applaud. No political correctness back then. Inyo Sheriff's Lieutenant Randy Geiger shared a copy of the Owens Valley Herald for the report on the murder of Constable Walter Reed, honored in Sacramento this week.

Aside from the remarkable story about the constable, we got a large charge out of the newspaper. They called the man who shot the constable a "highbinder", a descriptive word that means outlaw or crook. Call it like it is. The First Amendment demands it.

So, here we go. Why didn't the Inyo Supervisors show more compassion for the business owners in Independence, a town whose economics veer into the highly marginal. They survive on highway traffic, which right now can't wait to get through the Caltrans project mess. The best the esteemed leaders could say was they hope the people of Independence understand they're getting a better road. Hello! What about the facts – lots of lost revenue by businesses. They have petitioned Caltrans for compensation. Why didn't the Board consider joining in with support? Instead, they ho-hummed it as "a necessary evil" for the little town and "unintended consequences."

The Mammoth Town Council listened to its people, who have, over the years, made it clear they want a compassionate wildlife program in town. The Department of Fish and Game does not approve, but with a recommendation from citizens, the Town Council said yes to a new bear management plan, which does include the work of Steve Searles.

We just have to repeat the mantra: Government exists to serve people, not the other way around. One more thing. News people exist to serve people, too – as the Owens Valley Herald said in 1912, "chip the block of publicity without caring where the chips fall." We're in the business of revealing things to people, not concealing them. Just something for local politicians to keep in mind.

We do have a good-news bureaucratic item. Brandon Shults, Director of Information Services for Inyo County, told the Board that his department checked each one of 661 phone lines in county government and found 100 of them could be disconnected. Shults said this amounted to a savings of up to $20,000 in a year. He credited employee Jean Navarro who did the leg work and found the unnecessary spending. Cudos to Shults and Navarro.

And more congrats to Mammoth Town Councilman Skip Harvey who took the initiative to design an animated Main St. in Mammoth for the Fourth of July. Reporter Lara Kirkner has a story on that, so stay tuned. Everyone appreciates an elected official who uses creative thinking to make important holidays better, and who knows, maybe the idea of a walkable downtown will stick the rest of the year. Thanks for that, Skip.

We work to provide daily news to all of the Eastern Sierra, in the tradition of Eastern Sierra News Service and the Sierra Wave. We bring you daily happenings, local politics, crime, government dealings and fun stuff. Please contact us.
View all posts by News Staff →
Community’s American Flag Returned
Councilman Harvey Inspired by Fourth of July