Added to the other lies of trickle down economics and the check’s in the mail, AT&T has proclaimed that if they can buy up 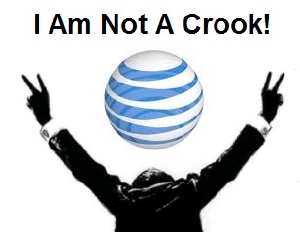 T-Mobile service will improve generally. Oh, really. When the U.S. will have only two cell phone providers? One step from monopoly? That’s not what the rest of the world has experienced. Information reveals that other countries that support numerous cell phone providers offer far lower rates to customers and far better service. They’re competing!!! Gee. What a concept. Come on, FCC, look for the truth.

Don’t count on it, with all the current insanity afoot. Take this story – the State Bar Association revoked the license of a Carlsbad attorney. His crime? He reportedly advised foreclosure victims to break in and retake their homes. Attorney Michael Pines argues that most of the foreclosures and evictions of homeowners are conducted illegally because the banks and investment firms who claim ownership of distressed properties don’t have clear title to them. Attorney Pines also points to the Bar Association conflict of taking massive dues from law firms that represent banks.

On the wider bureaucratic scene, Los Angeles Unified School District has given in a very teeny tiny bit to Chef Jamie Oliver of ABC’s “Food Revolution.” Oliver challenged LA schools, that serve 122 million meals per year, to break out of its sugar-laden brownies, chocolate milk, pastries and pizza menu. LA Unified officials won’t let the outspoken chef on their campus, let alone in the cafeteria kitchen. Oliver invited parents to bring samples of the LA Unified food to his kitchen in Westwood where he has diagnosed the school fare as “airplane food.”

Oliver wants to help America build a better diet and erase obesity. LA schools say he’s not wanted. They are now inviting media in to see their dog and pony, or rather pad thai and sushi roll menu changes. They claim pressure from Oliver had nothing to do with it. Okay. Seems like it would be fun to have Oliver come to school. See what he has to say. See if he can help the kids. Bureaucracies build big ugly walls around what they do. Innovation and change not wanted!!! Big hint, public employees, that’s not why we hire you. 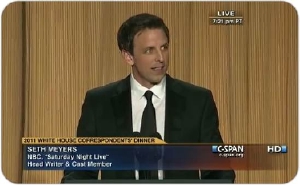 Did you see the Whitehouse Correspondents’ dinner? The comedic digs usually fly through the air at these dinners. This time, a comedian once more delivered the hard truth far more effectively than so-called legitimate news reporters, who have simply allowed Donald Trump to blather on as if he really has something important to say. Saturday Night Live’s Seth Meyers shot out zingers to everyone from the President to Congress and Katie Couric, with Donald Trump in between. Of Trump, Meyers said, “Donald Trump has said he’s running for president as a Republican, which is surprising because I thought he was running as a joke.” Trump, who clearly takes himself super serious, never cracked a smile.

Closer to home, take note local government – the people do not want you to pay for vehicles that workers just use to drive to work and back. None of them gets help with vehicles or gasoline. We’ll look further. Mammoth Hospital officials have said they will look further into official accreditation of their hospital. Our website readers have begun to question the value of accreditation since it does carry a heavy cost of time and extra work. We hear accreditation does mean a higher quality and safety of medical care. More later.

As one of our own in the Bureaucrat Beat Newsroom said, “I wish there was a law against people giving me gifts.” Yeah. Because in the case of Los Angeles County Sheriff Lee Baca, he claims he needs a law so he wouldn’t have to receive so many goodies.

Accortding to the Sunday LA Times, Sheriff Baca has accepted more than $120,000 worth of gifts and free travel since he was elected back in 1998. The Times story says Baca raked in free meals, free rounds of golf and tickets to sporting events from many donors, including executives who wanted business out of the Sheriff’s Department. Tacky.

The story also said that in a recent three-year span, Baca accepted more gifts than California’s 57 other sheriffs combined. When a watch-dog group challenged Baca about the gift addiction, he said it would not be practical for him to require background checks on gift-givers. He also said that refusal of their gifts would be insulting. Oh, really, for whom???!!!

We work to provide daily news to all of the Eastern Sierra, in the tradition of Eastern Sierra News Service and the Sierra Wave. We bring you daily happenings, local politics, crime, government dealings and fun stuff. Please contact us.
View all posts by News Staff →
Mammoth Town Manager salary and benefits go to Town Council
Bureaucrat Beat: Cell phone lies, comedic digs, and gifts