One of Bureaucrat Beat’s fans said to us the other day, “Why are the unelected people running our lives?” We asked for an explanation.

“The big corporations tell the politicians what to do. We never elected those big wigs,” he said. Good point. Until our congressmen and senators stop accepting campaign contributions we, who have no big bucks, will never have fair representation. The insurance and pharmaceutical companies will forever drive up the cost of healthcare and the bankers will forever wring too much money out of our economy.

On that note, we read a disturbing article this week. The Nation magazine published an article that revealed how the American Bankers Association pressured Congress to relax banking rules so they can pretend their balance sheets look 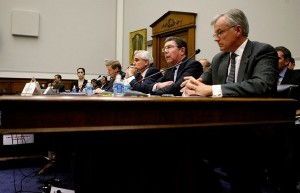 better than they really are. Wait a minute! That was the earlier problem – sleight of hand by big bankers that made things look okay and then it all collapsed from inside. This time, the Bankers Association and U.S. Chamber of Commerce pressured the House Financial Services Subcommittee to browbeat the board that sets banking rules. They caved in and relaxed standards. This in the middle of the biggest financial crisis since the Great Depression.

Joined Twitter yet? We in the Bureaucrat Beat newsroom have resisted. It’s just one more cybersociety to maintain. But, lots of folks are on there. Now, you can keep up with the Sierra Business Council on Twitter. You can just go on Twitter and search for SustainSierra.

Under the “Strange” story category of the Associated Press, try this one. Seems a Maine man and a friend made a beer run on a riding lawn mower. His drivers license had been revoked so he opted for the lawn mower. Seemed like a good idea! Motorists, disturbed by the mower on the highway, flagged down a highway patrolman who busted the mower man when he walked out of the store with a case of beer.

Sacramento has issued more budget cuts that will hurt the poor. The governor’s proposal will reduce money for In Home Supportive Services and will eliminate funds for the Caregiver Resource Centers, Adult Day Health Care, Healthy Families Program, and Medi-Cal Services.

And, get this – the State controller John Chaing wants a final budget agreement by June 15th to give him time to “negotiate loans from Wall Street to cover the state’s operating costs.” Good Grief.

The Sacramento Bee has published in an editorial that “The governor’s proposed cuts would leave California with the least support of its poor of any state in the nation and probably any government in the developed world.”

We go back to our plan for a half-time legislature. That would save big bucks. One of Bureaucrat Beat’s listeners also suggested that legislators get down to what counts. What do we really need from government? she posed. Law enforcement, the courts, health services and some limited public works. So, she suggested, get real legislators! Cut everything else and particularly all of those state commissions who get paid to do favors for their pals. Enough, already!

One more thing. Lots of folks don’t like the governor’s plan to close down state parks, like Bodie and the Mono Lake Tufa Reserve. As we said before, the state will actually lose money by discouraging business around parks. That will mean a loss of business tax revenue. For once the federal government has come up with a better plan. The National Park Service will give three fee-free weekends at more than 100 national parks to encourage more use of parks. That means more revenue. As the Mono Lake Committee’s Executive Director Geoff McQuilkin pointed out, that also means parks are more available to the many outdoor enthusiasts whose recreation budgets are tighter than ever.

We also read with interest the many comments on our website pointed at the police issue in Mammoth Lakes. We particularly liked the comment that honed in on accountability. That’s all the public really wants, along with good service.

We work to provide daily news to all of the Eastern Sierra, in the tradition of Eastern Sierra News Service and the Sierra Wave. We bring you daily happenings, local politics, crime, government dealings and fun stuff. Please contact us.
View all posts by News Staff →
Hit and Run At Benton Tribal Office
Town Council Will Talk Privately about Police Department