By News Staff on April 14, 2013 in Government Agencies/Utilities 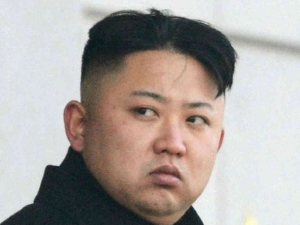 Observation on our website – a certain percentage of website commenters like to put other people down or express anger and superiority.  This is an unfortunate condition.  One could say this is the condition which drives the also unfortunate North Korean leader Kim Jon-un.  He likely really needs lots of money for his destitute country and people, so instead of asking for help he’s trying to extort it with fear and hatred. Ah, well, we can only deal with ourselves and our immediate situations.

The situation in June Lake was splashed all over the last Mono Supervisors’ meeting.  In the midst of the June Mountain discussion, someone asked Mammoth Mountain CEO Rusty Gregory if Mammoth were selling to Vail.  Big rumor these days.  Gregory said, “We’re not for sale.  There are no discussions with Vail, although,” he added, “Vail is very interested in buying Mammoth.”  Then he said that Starwood Capital will eventually sell Mammoth at some point.

In Bishop, rumors flew around that a 5th grader had brought a gun to school.  Bishop Police said a few days back another child had said his classmate had a gun.  This was while kids were on a bus.  The bus driver, according to police, pulled over.  Took the kid’s bag and found – no firearm.  Touchy stuff.

Here in the Bureaucrat Beat Newsroom we find ourselves sneezing a lot.  Allergies likely.  So, we have spent a lot of time inside, away from the pollen.  In our self-imposed solitude we are reading the eEdition of the LA Times.  A startling headline – “The Building Boom is Back”.  Wow.  Really?  The article goes on to say that people are fighting over the few homes now available but building is on its way.  If that’s true, the economy might make a hiccup toward the light side.  The Eastern Sierra  generally follows on the heels of LA.

Take Django Unchained.  That Hollywood production did come to the hills here, and now one of its stars, Jamie Foxx has moved on into science fiction.  He will reportedly write, direct and produce a five-episode horror series for the Syfy channel.  Stay tuned next October if that’s your thing.

It’s our thing in the newsroom to watch for irony.  Here are two pieces.  The LA Times reported that Los Angeles City Council members “expressed fury at recent arsenic emissions from a battery-recycling plant in nearby Vernon.”  Councilman Jose Huizar said of the southland air pollution, “I’m outraged.  I’m appalled.”  Let’s sit him down in the middle of a dust storm in the Owens Valley since he’s familiar with outrage.

And, while there are still no resolutions over how to stop DWP pumps here before they do damage, LA Councilman Tom LaBonge and representatives of the LADWP reopened the Lake Hollywood Walking Trail recently.  Said LaBonge, “The story of Los Angeles is the story of water. ( yeah, no kidding.)  Lake Hollywood Reservoir, which is nearly 90 years old,” he said, “is a local landmark.  I am excited to reopen this amenity.”  How nice.  What about amenities for the source of the City’s water?  Like a navigable Lower Owens River instead of one choked by tules.  Or, how about a little land to keep southern Inyo from just flat out dying??!!

Moving right along to other questionable statements.  The Drug Enforcement Agency recently said that Apple’s new texting service, Imessage, won’t do because “It’s too hard to wire tap.”  We’ll just keep telling it like it is here out in the open so they won’t have to wire tap the Bureaucrat Beat Newsroom.

On a similar note, the California First Amendement Coalition reports that a Superior Court judge in San Jose has ruled that the state’s Public Records Act applies to government officials’ emails and texts about government business even if those messages are sent or received using the officials’ private email or text accounts. No hiding allowed!!

A judge in Egypt has thrown out a case against television comedian Bassem Youssef who, in the style of America’s Jon Stewart, made fun of President Morsi and Islam.  Seems 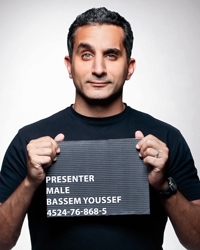 Bassem Youssef out of jail for now.

Morsi’s thugs have tried to keep a lot of reporters from reaching their offices if they are the type who poke fun at officials.  They don’t get it yet.  It’s a good thing America has no penal code for insulting politicians.  We’d all be in jail.

Speaking of jail, looks like there are too many of us behind bars.  A judge has pushed California to release more inmates and reduce the prison population.  Governor Brown will apparently fight this.  He says counties are already handling all they can, and the only other alternative is to let prisoners go back on the streets.

Reports say America has less than 5% of the population of the world but 25% of the world’s prisoners.  The New York Times reported in the past that the U.S. has the most people behind bars of any country.  That report says we incarcerate people for bad check writing and drug charges that would rarely produce prison sentences in other countries.  Maybe it is time to look at our laws and find other ways to deal with our people.

Could we please find a different way to deal with the Postal Service??!!  The federal government made the Post Office a “private business”, but they still make lots of critical decisions.  Come on, already, make it one or the other.  It’s failing, and we need it.  The USPS bleeds something like $16 billion a year in red ink – partly due to the internet and the rest to do with edicts from Congress.  We in the Bureaucrat Beat Newsroom feel Americans still need the Post Office as a critical public service.  We sure would rather our government paid for that than two painful wars.

Back to irony.  We have a new definition. The names of the Carnival Cruise line ships – Triumph, Dream, Elation, Legend.   Yes, those are the ones whose generators failed or some other technical glitch that has left thousands in less than happy waters.

The public information that I requested from Mono County Counsel was: an unabridged copy of a complaint against the use of my property. They would not include the name of the complainant

True that Trouble! With all that is wrong in the world, and all the activity’s and ways to divert our attention. We find ourselves just going with the flow of the destruction of our MotherEarth and people. We have the wrong incentive structure in the Political, and Justice system, and… Read more »

We can also make sure that we, ourselves, are living up to our highest ethical potential in our daily human relations and activities.
Don’t worry about what you can’t do. Focus on what you can do. Just a suggestion.
Benett Kessler

Right you are Benett. A strong sense of separateness in the past has brought about competition and warring. Entire communities have become unnecessarily divided. But now, we are more interdependent. So we need to communicate, hold dialogs, and compromise. It would be good to have a bullet that searches for… Read more »

Since we are on the subject, here is a TED talk worth watching and listening too.

Thanks J-Frog, I’ll look into that. I just read a CNN report that said we also lead the world in Isolated Confinement. The majority of those people are mentally ill.

Were #1. . USA! USA! USA!
Oh, Sorry. I thought I was at the Republican National Convention. LOL

History repeating itself?
Reply to  J-Frog

J-Frog,
Funny stuff! I thought I was the only one who noticed the creeping uber- nationalism coupled with strict authoritarianism on the top.
This always happens during tough economic times. We all know what happened in Germany way back when as the worldwide economy tanked.
Nationalism + Racism = Fascism

The earth is, to a certain extent, our mother. She is do kind, because whatever we do, she tolerates it. But now, the time has come when our powers to destroy is so extreme that Mother Earth is compelled to tell us to be careful. The population explosion and many… Read more »

California Public Records Act is a joke, at least with Mono County Counsel. You need a lot of money and the dream team to get information out of them. I tried to access public records directly pertaining to myself and they would not release it.

What kind of public information?
BK

Ridgecrest pulls that nonsense too. Every page costs money to copy and there are additional fees for administrative time. Factor in a disinterested or sometimes even hostile clerical staff member. “Public” information is indeed costly to obtain.

I love that picture of kim jon-un,looks like a spoiled child who probably does not wipe his own you know what. as a annoucement comes over the loadspeaker, wipers to the imperial bathroom immediatly.

I’m sure he doesn’t. In all likelihood he has a “washlet”, a toilet with a temperature adjustable water spray and warm air blow dry to wash your tookis with. Look, I could not make something like this up. It is a Japanese invention and it has caught on all over… Read more »

I’m sure he doesn’t. In all likelihood he has a “washlet”, a loo equipped with a warm water wash and blow dry for the tookis so one may wash up afterwards. Look, I could not make this up. It is a Japanese invention that has caught on all over Asia.… Read more »

Your commenting interface has some problems. Both times when attempting to post I would click the submit comment button and the result would be a warning that there was something wrong with the connection. So I tried again, hence the double post, and had the same result. Reloading the page… Read more »

Thanks. Let us know if it turns up again. Cyberspace is mysterious.
BK

25% of the worlds prisoners live here. Maybe we should stop locking up people for stupid little things that many of us have done in our past. Prison does nothing to help none violent people.

“Prison does nothing to help none violent people.”

Who cares, prison does protect the population from the violent criminal

Yeah Mark and Prison’s also protect the people that abuse children in the worst ways. .
But like you said “who cares”. . Really? do we need anymore proof why we are in the mess we are in now “who cares”