By News Staff on September 29, 2009 in Bureaucrat Beat

Good grief. We’ve never seen so many nasty comments as the ones posted on the Mammoth bear killing story. The most productive comments have asked for all of the facts. We urge officialdom to swiftly provide the best facts they can find. Don’t dawdle around like the investigation over the Rusty’s Bar Brawl that happened four months ago and still has no

disposition. Where facts are omitted, opinions spring up.

Positive treatment of animals does take work, not just lip service from all sides. That’s likely what Gandhi meant when he said you can judge the moral progress of a nation by how its animals are treated. No one, certainly not Steve Searles, has suggested harm to humans for the sake of animals. This is not an either or deal.

The best we can find in all of this whoopdeedoo is that people are examining their relations with animals and with each other. Thoughtful attention to the issues of life helps. Though maybe that’s not macho enough for some.

Meanwhile, how are people getting along with the tough economic times? The annual American Community Survey shows that the recession has disrupted life in many ways. People are delaying marriage and home-buying, turning to carpools and refusing to move. According to Mark Mather, associate vice president of the nonprofit Population Reference Bureau, “Job loss or the potential for job loss leads to feelings of economic insecurity and can create social tension.”

Other recent findings – homeownership has fallen and more older people are working. Tough times. Why not find ways we can all come together and help?

We learned of a very helpful act recently. Seems Community Services Director for Bishop, Keith Caldwell, searched for someone to help a Bishop couple. They were out of town when city crews cut down trees on their street for a sidewalk project. Scores of small trees then sprung up in the folks’ yard. They are elderly and somewhat disabled, so it was a real problem.

According to Bishop Public Works Director Dave Grah, Caldwell and his family looked at the issue as a work of community service. They got out there and removed many of the problem trees. The residents were mightily touched and called Mr. Caldwell a godsend. Bureaucracy truly at its best. 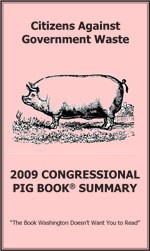 And, now for the worst. According to the group, Citizens Against Government Waste, pork barrel spending and earmarks continue in Congress, even in the face of promises to stop. Here are examples of pork in the 2009 Pig Book just released:

The Pig Book says that numbers of pork barrel projects went down but the amount spent went up from $17.2 billion to $19.6 billion. What do we have to do to make this stop?!? Since the guys who make these decisions are the same ones doing the spending, hope wanes thin.

More hopes dashed with this news. One of our fans shared an editorial cartoon with us, designed by Pulitizer Prize winning cartoonist Ann Telnaes. It shows three U.S. Senators “dancing with the money” from the health care industry. Senator Max Baucus of Montana, in charge of a committee and a health reform bill, took $3.9 million from the health industry. Senator Chuck Grassley of Iowa – $2.7million and Senator Kent Conrad of North Dakota – $1.6 million. Gee I wonder who they will benefit with their legislation?

We hear that when they retire, legislators get to take their left over campaign contributions home with them. Few have the integrity to resist. We need lots of new rules on the guys who make the rules!

We work to provide daily news to all of the Eastern Sierra, in the tradition of Eastern Sierra News Service and the Sierra Wave. We bring you daily happenings, local politics, crime, government dealings and fun stuff. Please contact us.
View all posts by News Staff →
Mammoth School Superintendent’s Intent to Resign Mystifies Public
Fish and Game Continues to Investigate Bear Shooting