Southern California Edison, you are the winner of the 2010 Bureaucrat Beat Bad Guy Award. We doubt anyone will top 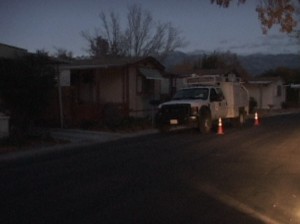 The only lights in Highlands were on Edison trucks.

your caper in the Highlands Mobile Home Park where you displayed wreckless disregard for human life, aesthetics, property rights and common sense.

Highlands residents have lived with frequent power outages for some time. Edison decided to revamp the electricity infrastructure in Highlands. Fine idea, but some bureaucrat somewhere must have said, “Hey, we’ll give them new equipment but we want to spend as little as absolutely possible. Don’t bother with the people just do the job cheap.”

So, they shut power off and kept it off all day long for at least two days, only turning it back on around 11pm after many elderly residents had huddled under piles of blankets, unable to use oxygen tanks that they needed. If all this weren’t bad enough, Edison bureaucrats added insults. Rick McManis of Highlands called Edison officials to blister their hides for the inhumane treatment. They never apologized or admitted how wrong their behavior was nor took responsibility. Instead, they offered condescending palaver.

The prize for Bad Guy of the year, Edison? Two nights in a mobile home in Bishop with no electricity. It’s called empathy training. We hope someone in authority makes heads roll. Come on, Edison, you’re making DWP look like Mother Theresa!

Will complaints accomplish anything? We doubt it. It’s the story with every big business or utility. We mentioned it on Tuesday – no customer service. The organizations are so big that they seem to feel they are now immune from real people.

Another Bureaucrat Beat listener told us about a similar encounter with Vons. Seems employees were encouraged to sing over the PA system in the Mammoth store, part of a fundraising deal. Customers found it annoying. One man complained to Vons complaint line and online. They ignored him. He called Vons headquarters where someone belittled the complaint and rudely said nothing would be done. As the local man said, “Vons has the ‘we are the only act in town’ attitude.” 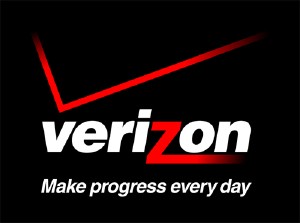 We will have to toss in an annoyance in the Bureaucrat Beat newsroom this week. Verizon phone service, not to be confused with Verizon Wireless, sent us a letter to say this was the second time they had written to us to call them about updating our phone service. All right already! We’ll call you. We dialed up the 800 number, went through the annoying menu and heard we would have to hold and wait for the next customer service agent. Okay. We timed it. When we gave up in disgust with no service, we had been on hold for 40 minutes. The Era of the Death of Customer Service.

One of our own here in the Bureaucrat Beat Newsroom came up with a brilliant plan. Establish in every bureaucracy, including businesses and utilities, the position of Common Sense Officer. This person would weigh in on most situations with the power to tell everyone what to do. Southern California Edison needs to hire several of these officers.

Hint-hint. Businesses, bureaucracies, utilities – if you have lost touch with individuals, your business has failed the customer service sniff test. And, just because you say you want to provide us with excellent service doesn’t mean you do!!!!

And, to conclude our rant on a positive note, Rich and Kathy White have done a wonderful thing for the Town of Independence, which has taken many blows over the years. The Whites have the former Mairs Market in escrow. It has sat empty and vacant for a couple of years or more. The Whites say they want ideas for the space or someone to rent it. Get creative. May the small town rise yet!!

We work to provide daily news to all of the Eastern Sierra, in the tradition of Eastern Sierra News Service and the Sierra Wave. We bring you daily happenings, local politics, crime, government dealings and fun stuff. Please contact us.
View all posts by News Staff →
The Victim Pays
Edison Apologizes and Plans for More Work