The meteorological word in the Eastern Sierra seems to match our mood entirely. The warm, moist, dark clouds drop in to cover us like a mother’s blanket over a restless sleep. The newsroom wraps us in yet another cocoon. Day three, trapped in the newsroom by Caltrans and Granite construction. 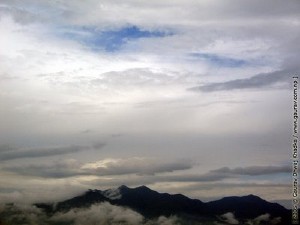 It’s actually a mental trap. They tried to physically snare us with their concrete, but we refused. Now, we just know they want to seal us into our closely watched newsroom. The May 2009 Caltrans calendar for Independence says they paved the new lanes last week, with re-striping and a shift of traffic. Nope. Nada. Didn’t happen. But, hey, the red square on the calendar says it’s all subject to change.

We all have to live with the change thing. Take Mammoth Lakes’ budget. As the Bob Dylan song goes, “Something is happening here, but you don’t know what it is. Do you, Mr. Jones?” Things seemed okay. The Town Manager said the new fiscal year budget was balanced, so what’s with the high anxiety? Things changed. Let’s face it. People don’t change as quickly as things do. The economy went south. Revenue sunk. The State got snippy. The Town did get rid of a couple dozen positions. This week, we’ll all find out if the Town was living off savings, as some say, without telling anyone.

Tell everyone about the Do Not Call registry. That’s something the federal government apparently did right. You register your phone number and all of those loathsome telemarketers can’t call you anymore. Woo-hoo! One of our listeners called to say it really does work. Another listener cautioned that some of the so-called robo-calls (the computerized recordings) slip through. Anyway, here’s the number. 1-888-382-1222. Thanks, Marlene.

We hear that something else works. Judge Dean Stout and his drug court in Inyo. We’ve heard some very positive words about the successes there, mostly due to the devotion and interest of the Judge. That’s a good bureaucratic story.

Here’s a Christmas gift. A new Sherlock Holmes film that stars Robert Downey, Jr. as the 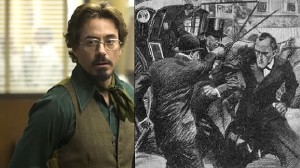 Personalized M&Ms?!? The height of silly indulgence, you say? Perhaps. But we prefer to apply this new zaniness (can you imagine eating your words?) to locally elected bodies. In the spirit of freedom, they will order up M&Ms with the words Yes and No printed on them. Then, they will place them in a bowl and at least once during public meetings agree to vote with candy. That’s right. Just reach in and pull out your vote.

Then, the public can decide whether the M&Ms or the public officials make the best decisions.

No one seems to think Chuck Caldwell made a good decision when he forced out tenants and closed down the Cottonwood Plaza in Bishop. The land owner, Lee Crosby said he has no idea what Caldwell has in mind. Clearly, not the best interest of the community and its businesses. Now, he wants to demolish the center. Why? Caldwell won’t say, and no one else seems to know. Strange situation for Bishop.

Now the Governor, et al, threaten to close state parks. Nice touch. More shots in the foot? According to the Mono Lake Committee, while the State spends money on parks, it also collects tax revenue on nearby business activity. The ratio winds up in favor of the State. Seems the State takes in $2.35 for every dollar it spends on parks. As Geoff McQuilkin put it, the whole closure proposal puts the State deeper in the red. Good grief.

Ironically, a new book on Bodie will come out next Monday. Fine. So, we can read about Bodie but never see it?

Wanna see Ghostbusters again? The LA Times says Dan Akroyd would love another go at the crazy film. Meanwhile, Atari will release Ghostbusters: The Video Game. The wild response to the game already has started Ghostbuster movie producer, Ivan Reitman to think seriously about Ghostbusters III. We need them to get rid of all the ghosties and ghoulies who hang out in Sacramento.

We work to provide daily news to all of the Eastern Sierra, in the tradition of Eastern Sierra News Service and the Sierra Wave. We bring you daily happenings, local politics, crime, government dealings and fun stuff. Please contact us.
View all posts by News Staff →
Citizens Needed to Help Save Klondike
Fire At Mammoth Pack Station