By News Staff on September 17, 2010 in Bureaucrat Beat

The lack of publicity for Mammoth Hospital open seats at the November election did hit several people the wrong way. We heard comments like “We are shocked seats are up for election. Nobody knew. Now it’s too late.” Others said new blood is needed on the hospital board – “someone who knows how everything is run.”

We had reported that the Mono Clerk did publish a public notice in the Mammoth Times but had not issued press releases. In spite of flying under the radar, the hospital board seats will go to election. Two incumbents filed – Jack Copeland and Linda Salcido. Dr. Dennis Crunk also filed. So, it’s three people for two seats.

Meanwhile, in Inyo County Supervisor Marty Fortney put in a word for private property owners who had to wrangle with Caltrans over painful months of meetings to take the front off their land for the four-lane project through Independence. I was one of those property owners, so I can speak to the angst. A meeting with Caltrans bureaucrats could be considered a form of torture – kind of like a vice screwed on your brain that tightens with every strange, disconnected statement about regulations and reality.

So is water. When rancher Daris Moxley stood up at a public meeting to ask which document rules ranch water, her DWP 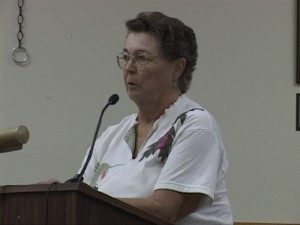 lease or the Water Agreement, no one had an answer. Not even local DWP managers. This issue reveals the weakness of the Water Agreement, which does speak to maintaining lease irrigation as it was in 1981. So, why don’t Inyo officials stand up for their constituents? DWP does say that their leases guarantee 5 acre feet of water per acre for ranch lands. Some ranchers say in 1981 they received much more than that.

Hey, this is not the only thing you shouldn’t believe. Seems the Food and Drug Administration had to issue warning letters to 17 food and beverage manufacturers for “false or misleading health and nutrition claims on their products.” Cheerios, for instance, proclaimed the power to lower cholesterol 4% in six weeks. The FDA demanded General Mills remove the claim. So, it’s likely best to do your food research before you go to the grocery store and just ignore all those happy assertions on the packaging.

Not happy – the public when it comes to government salaries and benefits. One of our readers/ listeners sent us an article from US News and World Report. Title? “Public Sector Workers Are the New Privileged Elite Class.” The comfortable salaries and Cadillac insurance policies do cause many of the working class to cringe with envy and resentment.

With the group of thugs who used to work for the City of Bell, CA, some of the cushy pay may tumble down. Attorney General Jerry Brown has now sued some of the derelict ex-employees in that town. The depth of corruption sounds titanic. Officials in Bell squeezed taxpayers and then openly and secretly directed the cash to their own pockets. Wow. Bureaucrats too far.

Car manufacturers not far enough soon enough. An article in the New York Times says that a new report from a University of Michigan researcher estimates that even without going electric, U.S. cars and trucks could achieve an average efficiency of 74 miles per gallon by 2035. That’s basically a tripling of fuel economy and a savings of dozens of tons of carbon dioxide in the atmosphere.

Director of the Earth Institute at Columbia University, Jeffrey Sachs, wrote in Scientific American this month that human-induced climate change is real and backed up by science although many Americans don’t believe it. Sachs says that sciences must scramble to measure, assess and address these issues, but public opinion needs to “catch up with reality”, he said.

Sachs also points to corporate interests who have “mastered the dark arts of propaganda, and they can use their deep pockets to purchase a sea of deliberate misinformation to deceive the public.” Sachs vows that his organization and others should bring “objective science to the public sphere” so citizens can become “responsible stewards of the planet before its too late.”

For those of you out there who are now saying, phooey, we don’t believe it. Why not spend some time on your own research and also consider that saving energy is a good idea anyway.

We work to provide daily news to all of the Eastern Sierra, in the tradition of Eastern Sierra News Service and the Sierra Wave. We bring you daily happenings, local politics, crime, government dealings and fun stuff. Please contact us.
View all posts by News Staff →
Dick’s Smoke Wagon Will Serve Up BBQ
The What and Where of Eastside Autumn