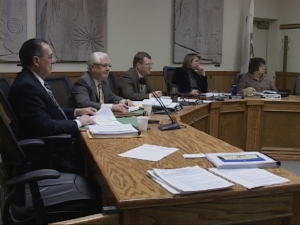 Today, in the Bureaucrat Beat Newsroom we have sad news and a few laughs.  So sad that Inyo Supervisors must take their own constituents to court to try to prove their wish for open government is illegal.  Hey, maybe there are legal issues, but the heart of the matter is the problem.  Inyo citizens feel shut out of their own government.  In fact, they have for some time.

We in the Bureaucrat Beat Newsroom feel that a good statesman could resolve this issue without court fights and bad feelings.  One or more of the members of the Board of Supervisors should call some of the proponents of the ballot measure that would force public projects into open discussion and a public vote.  First, both sides must remove their ego armor and leave it at the door.  Then, like neighbors who really care about each other, the people involved could talk it out – in public.  We bet  that if they lay aside the “us against them” attitude, good government would surface – one that does think first of the citizens and their needs and fears, one that will, hand in hand, find the best way for us to live together.  We hope that Supervisor Chair Susan Cash and any other board member will extend that invitation and find a productive way, outside the courtroom, to govern ourselves.

On to a much uglier arena – Congress.  Mega-billionaire Warren Buffett has laid out the problem.  He wrote an article in The New York Times entitled, “Stop Coddling the Super-Rich.”  Coming from one of the super wealthy, this has meaning.  Buffett writes, “Our leaders have asked for ‘shared sacrifice.’  But when they did the asking, they spared me.  I checked with my mega-rich friends to learn what pain they were expecting.  They, too, were left untouched.”

Buffett went further:  “While the poor and middle class fight for us in Afghanistan, and while most Americans struggle to make ends meet, we mega-rich continue to get our extraordinary tax breaks.”  He goes on to describe unconscionable tax loop holes for the billionaires, and he demystifies the fable that lower tax rates create more jobs.  Not so, says Buffett.  He adds that the super rich pay far lower taxes now than they did 20 years ago and lower payroll taxes, too.  The man with the money says Congress should raise taxes on those who make more than $1 million a year, including dividends and capital gains.  For those who make $10 million or more, Buffett suggests an additional increase in tax rates.  His last line says, “My friends and I have been coddled long enough by a billionaire-friendly Congress.  It’s time for our government to get serious about shared sacrifice.”   That’s what a rich man without greed sounds like.  Listen up, Congress.

And, under the Surely You’re Joking category, we had to chuckle when we read the Department of Water and Power’s excuse for no more clean up on 3 square miles of polluting dust on the Owens Dry Lake.  They pointed to “other sources of  dust”.  What other sources?  Do they think house cleaning in Lone Pine kicks up enough dust to violate federal standards?  Maybe it’s cigarette smoke from outside the Double L and Jake’s.  Geeeesh, DWP.  You need better fairy tales than these.

The poor utility just can’t seem to get on the side of the Angels.  Even when they’re trying to do the right thing, bad Karma catches up.  A recent story in the Los Angeles Times by Louis Sahagun found this: “Federal authorities are investigating the deaths of at least six golden eagles at the Los Angeles Department of Water and Power’s Pine Tree Wind Project in the Tehachapi Mountains, according to the U.S. Fish and Wildlife Service.”  Seems wind farms have gotten away with bird slaughter by their whirling turbine blades for years.  But when DWP did away with Golden Eagles, those were  birds too far.

How about Tules too far.  The poor Lower Owens River could offer a great boat ride for many miles except for the choking cat tails.  Sahagun wrote a story on that one too.  He pointed to the disappointment of what LA’s Mayor once called a major milestone in river restoration.  Los  Angeles – the City of Soundbites and short-lived triumphs.

…and do you people want a clue as to what really contributed to our current massive debt and deficit? Just read this:

Hey and you actually all use your real names! Thank you. I don’t understand those who want to make statements and even argue but hide who they are. Thanks for being real!

i agree Jennifer
My real name is Rusty
thanks

Ken and Greg, Bravo! This is exactly the kind of discussion we need more of in the Comments Section. Both of you represent your views well. While I personally lean towards Ken on this issue, I appreciate Greg’s putting forth his argument. We need to keep an open mind on… Read more »

Cheeseburger in Paradise….love that song….oh, wait,…… were not talking bout Jimmy Buffet?….Who’s the other guy?

Ken, thank you for your reply, but you have completely missed the point. When taxes were cut, in the time frame mentioned by Buffet, as well as Kennedy, Reagan, and Bush, income derived from taxes increased, not decreased. I have not proposed increasing taxes now, nor lower them. But I… Read more »

Greg Young wrote: Regarding your comments on Mr. Buffet, the statistics in his opinion piece gives evidence of the advantage of keeping taxes at the current rate. Here is the quote: ?Since 1992, the I.R.S. has compiled data from the returns of the 400 Americans reporting the largest income. In… Read more »

Not enough money in the world to pay off our governments unfunded debt.
So just keep spending Mr Uncle Sam

Regarding your comments on Mr. Buffet, the statistics in his opinion piece gives evidence of the advantage of keeping taxes at the current rate. Here is the quote: “Since 1992, the I.R.S. has compiled data from the returns of the 400 Americans reporting the largest income. In 1992, the top… Read more »

Seems to me that many initiatives as proposed are illegal or unworkable, but those initiatives go forward anyway, then are litigated afterwards. A good process, perhaps not, but in theory it’s out weighed by the benefit of being able to bypass the legislators and get something on the ballot. many… Read more »

“We bet that if they lay aside the “us against them” attitude, good government would surface –”

Bennett — what are you smoking?

RE: the Board of Supervisors comment…..while it is odd that this litigation is occuring it is ultimately related to the decision by the AOC in choosing Bishop as the location of the proposed new court slated for Bishop as well as a “county center;” this proposition has been brought by… Read more »

FYI,
The newly proposed county center has nothing to do with the AOC. It is purely a local project that would house Inyo County government employees. Citizens point out that their officials failed to discuss all of the important details in public.
Benett Kessler

Thanks for the clarification, Ms. Kessler.

Well-heeled” residents of Independence?! I’m guessing anyone who would make such a comment knows very little these people named in the lawsuit or the Town of Independence. These are in fact well-respected, prominent community members from Independence AND Lone Pine. Jim Bilyeu is a retired Deputy Sheriff and the former… Read more »

I say “well-heeled” you say “well-respected, prominent community members”…..point is, they have something to loose if a County center is built in Bishop.

Mr. James, you said “it seems to me that citizens should be kept informed of any major decisions which may encumber the tax payer with large debt such as a capital improvement project that may cost millions of dollars.” Yet logic based upon your arguement would also require that County… Read more »

Eamon, How is it the County would be losing tax revenue? According to the California Constitution, Article 13: TAXATION: SEC. 3. The following are exempt from property taxation: (a) Property owned by the State. (b) Property owned by a local government, except as otherwise provided in Section 11(a). (Note by… Read more »

Wow, I can’t believe I actually agree with Buffett.

‘ be a trend setter” instead of a mouth piece