By News Staff on June 10, 2013 in Government Agencies/Utilities 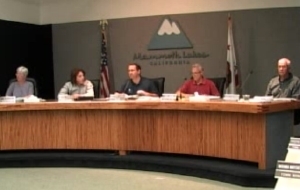 According to Town Manager Marianna Marysheva-Martinez, the Town’s financial position has “strengthened lately.” She said the major cutbacks of past months have helped and will lead to a projected increase in the General Fund reserve from $1 million to $2 million by the end of this month. The Manager also said that the projected shortfall for next fiscal year is now at less then $400,000 instead of the original $562,000.

Martinez said that “structural imbalances remain, and additional balancing measures will be necessary in the next four to five years.” She named two major factors – the unfunded Whitmore park and pool facilities and related parks maintenance staff. Another problem is the loss of community development grants which cover some $100,000 of staff costs. The Council is still considering what to do about all of this.

Also at their recent meeting, the Council recognized retiring Police Lieutenant John Mair. He had actually retired in January but stayed on to help through some very difficult times of major budget cuts for police.

The Council approved a volunteer policy which the Manager said sets a framework for a Town-wide effort. She said strong volunteer efforts are already in place in the Parks and Recreation Department. And, on June 19th, the Police Department will launch a volunteer program.

When asked to consider a ban of skateboards on the Town’s streets, the Council decided to take no action. The staff had recommended it after urging from the Town’s insurance carrier. On the issue of Code Compliance officials said there is not enough money to support that effort right now.

Aside from the budget issues – I am really tired of A-hole skateboarders cutting me off on Main Street as they zig zag back and forth through traffic. If you yell at them they flip you off. Hammer these idiots!

You could probably get away with running them over.

Wouldn’t that suprise them 😉

I don’t want to damage my bumper. Seriously what is the body count? I think I know of two skateboarders dying in town on city streets. Anyone know the real stats?

Structural imbalances remain… Admittedly, Martinez is telling us that we are underwater. BID covers up the symptom, it’s not the cure. A short term solution to a long term problem. They tell you these are new ideas but they have been tried before. This is not a panacea for Mammoth’s… Read more »