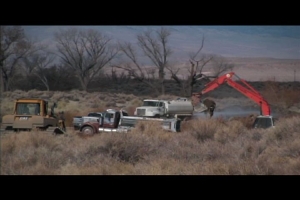 New lakes and ponds make big news in Inyo County, and so a major re-habilitation of one of the Buckley Ponds east of Bishop attracted a long list of local people, businesses and government agencies. Catherine Hurdle captured the action as contractors with heavy equipment volunteered their time and effort to haul out loads of dirt.

Dick Noles, often at the head of local volunteer projects, said the Los Angeles Department of Water and Power asked him last 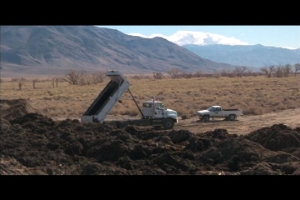 year if he could help with rehab of another Buckley Pond. Noles said DWP told him if he could get volunteers together, they would put the effort into it. Noles said local contractors and countless others responded and DWP agreed to contribute.

To name a few who go to the pond area to dredge it out and remove tules – the Forest Service, the Paiute Tribe, local contractors like Preferred Septic and Bishop Waste, Tim Hansen in Lee Vining, Art Hickman of Lone Pine, Brown’s Supply, the Rotary, Lions Club, and especially Lefty Irwin, who is also the spearhead of many volunteer projects. The groups will clear out the pond area, insert old Christmas trees as habitat for young fish and build a handicap ramp.

Noles said the idea is to rehab the pond and create a great warm water fishing area. The community had earlier refurbished the first Buckley Pond which is now full of water. Volunteers plan for the second pond to look like the first. Donations are coming in for bass and channel catfish.

The Buckley Ponds or lakes are tied together. Noles said the southern lake is complete with volunteers now focusing on the northern lake. Next year, they hope to rehab the middle lake.

This is excellent cooperation and all parties deserve a lot of thanks. I’m looking forward to projects like willow and cottonwood planting as well as fishing and paddling access on the Lower Owens River Project as time goes by.

I have to give DWP a lot of credit for helping make this happen. I have been bye these ponds several times and it is really wonderful to watch the progress. The finished pond is huge and the other looked like it’s almost ready for water. I had to dodge… Read more »

Dick Noles said one pond was done last year or so, they’re working on another now and the third will be
the subject of work in the future.
BK