On Monday, when the Bishop City Council agreed to pay David Buckingham $38,000 to avoid litigation over the City Administrator’s job, Buckingham was accepting another job as City Manager of Morro Bay. He was one of 50 applicants for the position and the number one choice. 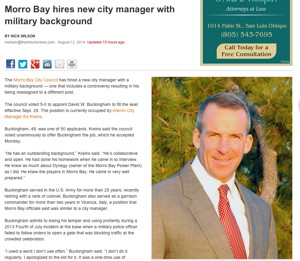 As we have reported, sources confirmed that Buckingham signed a contract offered by the Bishop City Council to take the job as City Administrator here. Reports said the Council later withdrew their offer with no public explanation. Buckingham claimed damages.  The City Council agreed to pay him $38,000 to avoid litigation.

The Morro Bay City Council voted unanimously for Buckingham to fill their City Manager job effective September 29th. A press release from that City says Buckingham passed a comprehensive vetting process, including interviews by citizens and the City Council. The release says Buckingham’s final job for the military in his 25-year career was Director of Environmental Services at the Pentagon.

Buckingham’s command in Italy drew attention in Morro Bay as it did in Bishop. While the command included many tasks similar to a city manager, there was some controversy over his treatment of a military police officer. In the San Luis Obispo Tribune, Buckingham is quoted as saying that he lost his temper and used profanity during a fourth of July incident in which an officer failed to follow orders to open a gate that was blocking traffic at the crowded celebration.

Credible sources in Bishop said that the Bishop City Council had this same information before offering Buckingham a contract as City Administrator. The Tribune quoted Buckingham on the Italy situation as saying, “It was not poor management because of the actions that I had to take to hold a few people accountable.”

The Interim City Manager of Morro Bay was also quoted as saying he spoke with two three-star generals who endorsed Buckingham “100 percent.”

Buckingham will make more money in Morro Bay than he would have in Bishop. His salary is $160,000 plus benefits. His contract is expected to be ratified August 26th – around the same time Jim Tatum will go to work in Bishop as the new City Administrator.

I’m glad that Bennett is willing to tackle this news breaking story after KIBS initially reported it as the top news story on their local news Monday the eleventh at 7:00 am !!!! Then mysteriously that was not broadcast on the noon news !!!! And nothing in the Inyo Register… Read more »

What is also interesting to note is that out of 50 applicants for a similar position in the upscale community of Morro Bay, the Colonel finished first in the selection process. In light of the availability of the information concerning the Colonel’s background, I find it hard to believe that… Read more »

Frankly I commend the city of Bishop for not hiring the retired colonel. He was relieved of command mid tour. I am a former officer. The military doesn’t do that unless it has some pretty good reasons. Have a look at this Army Times article. http://www.armytimes.com/article/20130909/NEWS/309090034/Vicenza-garrison-commander-relieved-duty It is couched in… Read more »

Isn’t it interesting though, “Desert Tortoise”, that they did know about all of this before they made their decision and STILL sent him a contract? 😉

What branch of service and what rank were you DT? And more importantly did you lead men into harms way? You want to be considered an authority on military jargon so lay out your qualifications since you see fit to question the Colonel`s qualifications.

I was a pilot in the Navy. Most of what you do isn’t flying but leading a division or department.

@DT You’re missing the point. People aren’t upset about whether or not the guy was hired. People are upset at the incompetent hiring process that led to the City having to shell $38,000! If you’re able to Google the candidate, they could’ve Google’d the candidate, and should have done so,… Read more »

That you are a former naval officer DT makes me wonder how the fact of contemporary flag officers bending to whichever political breeze their fingers detect has escaped your attention.

What makes you assume I do? I’m more concerned with flag officers retiring and immediately taking a position with a large defense contractor. It makes the decisions they made in the previous few years suspect. I think you will find most political ideologies represented among the ranks of military members.… Read more »

Nice job council! You’re voted in by the public to make wise and responsible decisions for the good of the city and it’s citizens. Except for Glidewell who was appointed after losing in the last election. News flash you folks blew it! Nice that mayor Ellis and Glidewell believe they… Read more »

Bishop dodged a bullet on this one… Thank your lucky stars the City did not hire this guy. He would have been trouble…

Actually, Mark, we didn’t “dodge a bullet”, we missed the “mark” (no pun intended!). This man was very qualified for the job, which is why he was chosen to begin with. It’s too bad that politics had to get in the way. 🙁

Disappointed, I’m also curious what info you know that could better inform us. I would love to know how this got screwed up.

Mark, I’m curious about the Colonel. Could you please elaborate on what would make him trouble. You must know something the rest of us are unaware of.

Can I remind you Dee that you criticized and told me” I didn’t know what I was talking about ” when this story was first released. Just because this stuff happens in most small towns, it doesn’t make it right and people should to be able to say so.

Trouble, I detected a slight implication in your original post about Jim Tatum. That was what I was responding to. What my question now is how this process got screwed up. I and I’m sure you and many people like myself would like an answer. I’ve defended the City Council… Read more »

Dear Mr Buckingham , Now that you have that California Job and you are not going to be financially impaired with the loss of the Bishop job maybe it’s time to count your blessings and not financially impair the constituants of the City of Bishop. This is a beautiful place… Read more »

I would be shocked if that ever happened.
remember most of these public servants care about one thing and one thing only
The size of their salary and benefits package.
not to mention their pensions
GGW

Maybe the Council should reduce their salary by $19,000 and offer to split the difference with Buckingham. Then Council could also count their blessings and hold their head high, doing the right thing and not financially impair their constituents. Heck, maybe Tatum should pitch in too. How about Tatum $12,000,… Read more »

Really!?! This gentleman was wronged by our city. Maybe you should take up the financial loss to the city with our council members. THEY are the people this should be directed at, Mr. Anaya.

Bishop’s loss is Morro Bay’s gain. Sounds like we truly missed the boat.

Mr. Buckingham and family obviously had expenses that accompanied this debacle . Those expenses needed to be comped . Now that he is headed out west , once again maybe some of those expenses and upset will be covered with his new job. Asking the Mr. Buckingham to make a… Read more »