For those who had forgotten, Tuesday evening’s shocking weather developments delivered a renewed respect of how fast and how terrible wind and snow can paralyze the highway with what one officer called the “white curtain of zero visibility.”

Highway 395 began to close down in the face of a jack-knifed big rig near the Green Church and super high winds mixed up with snow. It didn’t take long for traffic gridlock, and Caltrans and the CHP closed down 395 from 203 to 15 miles north of Bishop. As many as 40 people were reportedly stranded in the closed section of 395. They were all out by 11:30pm, although one man with two children seemed to be lost. After some desperate hours, it was learned he had made it home to Crowley.

Some Sheriff’s deputies were stuck in the mess, along with other motorists. Snow had drifted deeply across the highway, blocking traffic. MMSA sent down snowcats to help clear out the tons of snow. Caltrans brought up equipment to help.

In the midst of it all, a man had reportedly suffered a heart attack in Mammoth Lakes. Mammoth Hospital and Mono Paramedics prepared to drive the man down to Bishop Airport for a medical flight out to a bigger hospital or to Northern Inyo Hospital.

The snarl of zero visibility and gridlocked traffic posed a huge obstacle for the emergency medical situation. Finally, with heavy equipment in front, the ambulance inched down the highway toward Bishop.

We were there when the ambulance rushed down Bishop’s Main St. to go to the airport. Law enforcement escorted the ambulance to the Sierra Life Flight hangar building where family 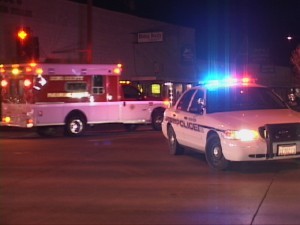 members had gathered. Spokesmen on scene said they believed the local man, reported to be Jim Waggoner of the Bishop area, would be flown out.

After a rough night out on the highways, Caltrans crews were able to re-open 395 today as far as Mammoth. The Highway Patrol was escorting drivers into town, but considering the zero visibility last night, this was a drastic improvement. When Bill Le Fever and I drove up the Sherwin Grade this morning, the road was relatively clear. Only the wind-scoured hills and sculpted snow gave any sign of the sandblaster conditions of hours before.

Long lines of cars built up at Tom’s Place as Highway Patrol officers escorted drivers toward Mammoth Lakes. A big rig stuck at the Green Church left one lane open. The driver of the rig said that he spent the night in his cab after his brakes froze. Once he had stopped on the highway, the wind blew his trailer in a slightly jackknifed position.

The mechanic with Britt’s Diesel, called in to assist the rig last night, also spent the night on the road. When we talked to him today, he was working to thaw out the brakes so the driver could turn the rig back toward Bishop.

The storm was far heavier on wind than snow, and at times the highway appeared to be fine today. Other stretches of road where the drifts had blown in, had only one lane plowed through. With the highway patrol escorting traffic, the Caltrans crews and their plows worked to get the highway open.

Tuesday night, 395 over Conway Summit shut down due to an avalanche north of Lee Vinning. Crews had not opened that section of highway as of news time.

After a night of vehicles stranded on the highway because of the zero visibility, highway patrol dispatchers say that as far as they know there are no more people trapped in their vehicles on local roads. This is always a concern when 395 shuts down as some drivers try to get around the closure by taking the less travelled roads like Lower Rock Creek, Benton Crossing and Crowley Lake drive.

395 in the Eastern Sierra shut down completely Sunday night due to high winds and blowing snow. Tuesday night was a repeat performance by the winter winds. Forecasters are calling for another windy storm on Thursday. Whether the weather goes for the second encore performance is yet to be seen.

We work to provide daily news to all of the Eastern Sierra, in the tradition of Eastern Sierra News Service and the Sierra Wave. We bring you daily happenings, local politics, crime, government dealings and fun stuff. Please contact us.
View all posts by News Staff →
Clean Up After the Wind on 395
Mammoth Sex Crime Cases