One of the highest awards a local Lions Club can bestow upon one of its members is the Melvin Jones Fellowship, named after the founder of Lions International in Chicago, June 7, 1917.  The award is actually an investment made by a local Lions Club through its headquarters in Chicago for international programs aimed at vision and hearing loss prevention and treatment, fighting global diabetes, hunger reduction for needy children, environmental improvement and solving pediatric cancer. 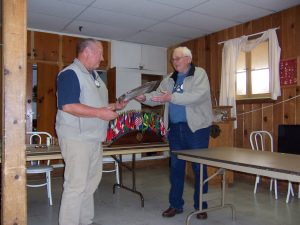 Lion Bruce joins 40 other Bishop Lions who have received the Melvin Jones Award over the Club’s almost 60 years of community presence and contributions.  Special Diamond Progressive Melvin Jones Foundation awards have been given to Lions Janet Lowney (December 2014) and the late Past District 4L-1 Governor Ray Schaaf (January 1991).

Lion Bruce joined the Bishop Lions Club in 1996 while still busy teaching at Palisade Glacier High School, specializing in history, government and economics.  Following his retirement from teaching in 2009 Lion Bruce became more active in the Bishop Lions Club’s many fundraising activities, including working the Lions food booth at the Tri-County Fairgrounds during Mule Days and the County Fair, specializing in corn dogs!

While working his way up the volunteer ranks within the Club, Bruce served more than corn dogs and pancakes!  He did stints serving on the Board of Directors as 3rdVice President, 1st VP and President as stated before.  He still worked corn dogs and pancakes, but also became one of “The Sausage Guys”, worked with “Almost World Famous”  Lion Lefty Irwin building 10-15 of the 125+ handicap ramps the Club constructed and placed in Bishop and the Owens Valley,  and several of the handicap accessible fishing docks/floats now in place at Buckley and Rawson Ponds and the Millpond Recreation Pond facility.

Lion Bruce is a UCLA graduate in education, and is an Air Force veteran 1970-75.  He and his wife, Maggie, live in West Bishop and work and enjoy community activities and serving Lions International.  Members of the public who may have questions about the Bishop Lions Club, its regular meetings and its ongoing community service projects and activities are invited to call President John Wooley(760-872-3239) or Club Secretary Janet Lowney (760-873-7060) .