By News Staff on May 7, 2014 in Entertainment/Local Events/Activities, General Misc. Stories
Only a few talented teams in the history of Eastern Sierra high school sports have won section titles, and now the 2014 Bishop Union High School golf team has joined that list. 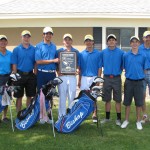 The Broncos captured the CIF-Central Section Division 3 Boys Golf Championship with an impressive performance Monday at Lemoore Golf Course.
Led by the excellent play Levi Kujawa, Sean Mitton and Joey Medora with solid rounds by Matt Ono, Brian Jones and Bryan Gonzalez, Bishop dominated in its first Central Section tournament, winning with a team score of 402 (best five scores out of six) to beat second-place Woodlake by a whopping 28 strokes. Exeter was third at 432.
“The Bronco players stayed focused, determined and mentally tough to bring home the CIF team title,” Bishop coach Shirley Ono said. “The goal was to do our best one shot at a time and not let a bad hole impact remaining play.” 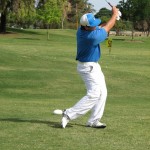 The Broncos did that the entire season. Bishop was once again the top team during the regular season in the High Desert League, which moved from the Southern Section to the Central Section at the beginning of the 2013-14 school year.
Coach Ono described the Lemoore course as narrow on the front nine and slightly more open on the back with out-of-bounds a constant factor; winds were calm and the greens a bit slower than usual but rolled well.
The Broncos took home the title on a course they had not played before, but it did seem somewhat familiar. 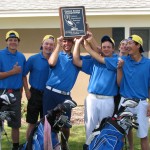 “The course was similar to Bishop Country Club making it easily adaptable and comfortable to play,” said senior Levi Kujawa, who shot a 2-over-par 74, second best in the tournament and low round for the Broncos.
“The team has put in endless hours of work for this sport and it really showed on our winning performance today,” said junior Sean Mitton, who fired a 75.
“It was a great team effort. We knew what we had to do and executed,” said senior Joey Medora, who shot 76.
Senior Matt Ono, the coach’s son, finished ninth in the tournament with an 87. Brian Jones shot 90 and Bryan Gonzalez 101 for the Broncos, and coach Ono said many other players and people helped the Broncos to the section title.
“The six CIF team players are joined and supported by an additional nine members who are an integral part of the team and its overall camaraderie: Luke Olson, Cole Murphy, Riley Anderson, Rosalind Cardenas, Charlie Boling, Chase Cortez, Gabi Cortez, Chet Shultz and Tannon Tremayne.
“The success of the team is also due to the dedication of assistant coaches Tani Tatum, Tim Shultz and Dan Raftevold, together with Bishop Country Club and its members.”
Coach Ono was especially happy of her players’ dedication.
“The team’s work ethic this year at daily practices and during our strength and conditioning training paid off,” Ono said. “We are proud of their hard work and especially of the positive comments that were relayed about the Broncos’ sportsmanship and etiquette during this tournament (from group marshals) and during the season.”
Matt Ono and Sean Mitton were voted by the league to the first-team HDL for sportsmanship and etiquette, and they along with their Bronco teammates and coaches, earned a section title with not only fine but gentlemanly play.
“It has been a great four years,” Matt Ono said. “We are proud to bring home a CIF championship to share with the school and community.”
– Photos and information courtesy of Shirley Ono

Congratulations to Coach Ono and the golf team. Winning the tough Central Section is quite an accomplishment.