After dominating the High Desert League, the Bishop Union High School football team looks and works toward the next goal: A section championship. 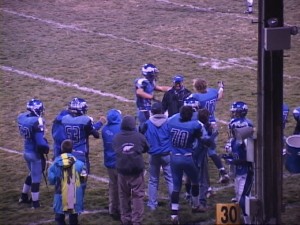 The Broncos crushed visiting Desert (Edwards Air Force Base) 75-0 last Thursday at John Schwab Field to win the HDL title and earn the No. 1 seed in the Northeast Division for the CIF-Southern Section Ford Championships, Presented by Farmers.

Bishop will host Mojave in the first round of the playoffs this Friday, the first of what Bronco fans hope will be four straight wins in the 16-team tournament.

“They’re really good, and they execute really well,” coach Bill Egan said of his Broncos. “But we did have a few kids get dinged up tonight.”

Bishop (9-1 overall, 5-0 in league) rolled through the league campaign, outscoring its opponents 256-13. Desert (6-4, 4-1) came into the HDL title game undefeated in league and on a six-game winning streak, but the Scorpions were no match the fired-up Broncos.

Junior quarterback Chance Callahan had a huge game, with 119 yards rushing and four touchdowns and 152 yards passing with a TD

The Bronco defense recorded its third shutout in league play. Oriheula and Thompson had excellent defensive games, as did Gonzales, Aaron Puls, Quina West, Thumpsa Shoshone, Alec Simpson and Robertson, among others.

So now the Broncos begin the second (post)season, where Egan has guided teams each of his 10 seasons at Bishop and into the semifinals three times but never reaching the title game..

“The whole thing for the next four weeks is for us to stay healthy,” Egan said. “We have a great group of kids with a lot of skill, and this could be the year we win it all.”

Mojave (6-4, 3-3) receieved an at-large berth in the playoffs. The Mustangs took fourth place in the Desert Mountain League, one of four DML teams which made the playoffs, along with Desert Christian of Lancaster, Vasquez of Acton and Boron. Those three teams tied for the DML title, and a series of coin flips gave Desert Christian the DML No. 1 designation, Vasquez No. 2 while Boron received an at-large berth.

Boron would have received the No. 2 seed in the Northeast Division, but since the Bobcats lost the coin flips, CIF protocol dictates a non-league champ cannot receive a seed higher than the top designated teams from its league.

That put Rio Hondo Prep into the No. 2 seed, with Vasquez seeded third and Desert Christian fourth.

The winner of the Bishop-Mojave game will play the winner of Chadwick-St. Monica. Should the Broncos beat Mojave, Bishop will be on the road in the second round, having lost a coin flip with St. Monica of Santa Monica and automatic with Chadwick of Palos Verde Peninsula (Bishop at home, Chadwick on road in first round).

The Broncos put up four fingers before the start of each fourth quarter, and that could mean something different now: Four more wins for a title.

Sierra Wave TV33 has been broadcasting Bishop High football since 2000, and Bronco fans can see the win against Desert through Wednesday (times available on sierrawave.net ). Sierra Wave TV33 will also show all Bronco playoff games, starting with same-day coverage of the Bishop-Mojave game at midnight Saturday, and again starting at noon Saturday.

We work to provide daily news to all of the Eastern Sierra, in the tradition of Eastern Sierra News Service and the Sierra Wave. We bring you daily happenings, local politics, crime, government dealings and fun stuff. Please contact us.
View all posts by News Staff →
Mattinson on the Merry-Go-Round
Edison Power Outages Continue at Highlands