The numbers tell the story: A quick “pick six” among seven touchdowns helped lead the No.1 Bishop Union High School 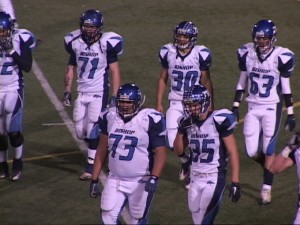 football team into the final four.

Kyle Goin had a 31-yard interception return for a touchdown on the first play from scrimmage and took the first play of the second half for a 63-yard touchdown run to spark the Broncos to a 49-20 victory over Chadwick (Palos Verdes Peninsula) at Los Angeles Harbor College Friday.

The victory puts Bishop into the Northeast Division semifinals of the CIF-Southern Section Ford Championships, Presented by Farmers, where Bishop will host Pasadena Poly. The winner will meet the winner of Vasquez at Boron for the championship.

Chance Callahan streaked untouched for a 74-yard touchdown run to give Bishop (11-1) a 14-0 lead about four and a half minutes into the first quarter, but Chadwick (9-3) scored two touchdowns for a 14-14 game with 1:35 left in the first quarter.

But Aaron Puls and the Broncos quickly responded. Puls returned the ensuing kickoff 34 yards to the 48-yard line, then the senior running back scored in just two plays, following a 24-yard power blast with a 28-yard TD run. Cody Rigney’s extra point gave Bishop a 21-14 lead.

Goin added a 9-yard TD run with eight minutes left in the first half for a 28-14 Bronco lead, but Chadwick answered with a solid TD drive and it was 28-20. Bishop drove inside the Chadwick 15-yard line late in the half but couldn’t score and the stage was set for the second half.

The Broncos haven’t had to play many full games this season, with five running clocks among other blowouts. But Goin’s long run to start the second half showed Bishop was ready for the Chadwick challenge, and Aaron Puls later scored on a 9-yard TD run for a 42-20 Bronco lead with about just under five minutes left in the third quarter.

A strong Bishop defensive effort led a blocked punt by JV-callup Curran Simpsonand the Broncos took advantage of great field position as Callahan scampered in for a touchdown and the 49-20 victory margin.

The Broncos now face Poly of Pasadena, a 43-27 winner over Desert Christian of Lancaster. Bishop and Poly both have had one home and road game, but Bishop won a coin flip to get the home game at John Schwab Field on Dec. 3.

Vasquez beat host Desert 31-6 and Boron defeated visiting Rio Hondo Prepof Arcadia 14-6 to set to set up the other semi.

Notes: Bishop has won a coin flip with Boron (both teams will have had two home games and one road game) so the Broncos would host the Bobcats if Bishop beats Pasadena-Poly. Vasquez, with two road games and one home game, would host Bishop in a title game. Bishop defeated Mojave 41-0 in the first round of the playoff. The Broncos reached the semifinals for the second straight season and fourth in head coach Bill Egan’s 10 years at Bishop. The Dolphin touchdowns were the first against Bishop in six games, going back to the High Desert League opener. The Broncos had allowed just 73 points in the first 11 games.

We work to provide daily news to all of the Eastern Sierra, in the tradition of Eastern Sierra News Service and the Sierra Wave. We bring you daily happenings, local politics, crime, government dealings and fun stuff. Please contact us.
View all posts by News Staff →
Tahoe-Reno Area Search Called Off; One Inyo SAR Member Helped
Mammoth Hospital Board Chairman Resigns