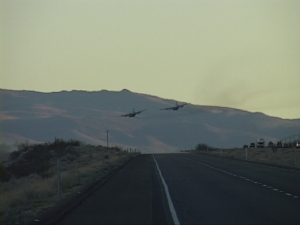 slow and very low to the ground. We saw two of those planes south of Olancha.

According to China Lake Naval Weapons Center, the planes are part of the Royal Air Force from the UK. Spokesmen told us that they are conducting tests and training operations “in accordance with a bi-lateral agreement between the US and the UK.”

China Lake said it is unknown exactly what they are testing. Locally, some speculated that it might be flights below radar.

We work to provide daily news to all of the Eastern Sierra, in the tradition of Eastern Sierra News Service and the Sierra Wave. We bring you daily happenings, local politics, crime, government dealings and fun stuff. Please contact us.
View all posts by News Staff →
Collision leaves three uninjured in Bishop
Winnedumah suffers water, ice damage