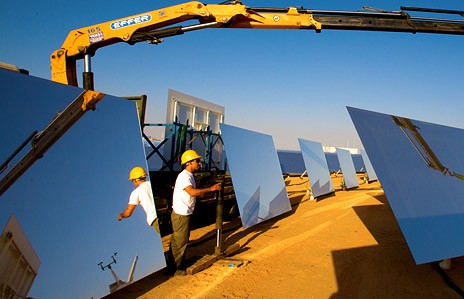 Inyo officials had haggled repeatedly with BrightSource over how much the project would cost Inyo County. The County Administrator, Planning Director and other department heads devoted many hours to calculating costs and representing the County at hearings before the California Energy Commission and their staff.

After final hearings went forward, BrightSource issued a statement that said on Wednesday BrightSource “informed the California Energy Commission that it is suspending its permit application for the Hidden Hills…project.” The statement goes on to say that “This week, PG&E and BrightSource mutually agreed to terminate the power purchase agreements in connection with the Hidden Hills project due to challenges associated with the project schedule and uncertainty around the timing of transmission upgrades.”

BrightSource referred to the need for solar thermal power with storage. They said Hidden Hills is a good site for that type of technology but to change plans would require reopening of the evidentiary record to account for new impacts.

A similar turn of events happened in January when BrightSource and Southern California Edison “mutually terminated” a power purchase agreement for two projects near Blythe, California. BrightSource had asked the Energy Commission to put those projects on hold. BrightSource officials now say they will focus on the Palen project in Riverside County. This project was already permitted by the CEC.

When asked for the County’s response to the sudden BrightSource news about Hidden Hills, Inyo County Administrator Kevin Carunchio said, “We received word that BrightSource suspended its permit application Wednesday and were shocked. The project seemed to have a lot of momentum within the CEC process, but it sounds like there were greater issues at play.”

Carunchio confirmed that the agreement signed by Inyo and BrightSource runs with the project and so it is suspended as long as the application is but “remains in place if the project is resumed.”

Back in the early 90s they wanted to put wind turbines on a remote part of an area outside of Boston Mass that is pretty much windy all the time. It wouldve powered 10000s of homes and businesses in the area. There was one problem, It was near the Kennedy… Read more »

When I bought my property out in Charleston View in the 1990’s, the county had their hair on fire about the possibility of a major residential development out there, requiring road improvements, law enforcement, fire protection, etc. Sound familiar? Water and electric infrastructure has a record of displacing people. Dams… Read more »

Jim, for the record I am also a big supporter of Roof Top Solar. The biggest advantage is that because it is do dispersed, it does not require any big infrastructure upgrades like additional transmission lines.

Just out of curiosity,what ever happened to that gold mining operation,Cougar Gold, that was supposed to “save” Bridgeport ,where they were going to tear into the Bodie Hills,and employ “hundreds” of local citizens…and do no damage to the land ?..When that operation was being debated,it seemed lots of locals saw… Read more »

….and wonder about another of those out-of-towner operations meant to “enhance” and employ without taking away from the land…or,in this case,the “view of the sierras”…..outside of Lone Pine near the Alabama Hills…think it was called “Whitney Portal Estates”…where the L.A. dude wanted to sell lots and build these nice,big homes… Read more »

If we intend to survive on this planet, we need to align ourselves with MotherEarth’s natural order laws! Whether your a fundamentalist, conservative, liberal or progressive it doesn’t matter because what you believe is always bound to MotherEarths natural order laws. We have these life support systems on decline, climate… Read more »

Tim, the solar panels need to be where they can get the most sun. This is in the desert. Fossil fuels to produce electricity are a finate resource that are getting more difficult to obtain. The low hangng fruit has been picked so the return on energy invested raito is… Read more »

There is no shortage of sunshine in LA and plenty of parking lots, warehouse and shopping center roofs to put solar panels on. The whole of the former Chatsworth Reservoir could be a very nice solar installation. Likewise the bed of the former Upper Van Norman Reservoir, abandoned since it… Read more »

DT, Bright Source technology is solar thermal concentration not photovoltaics so roof tops in Los Angeles are not an option. Their solar concentration technology is similar to what you see at Four Corners as you head south on HWY 395. When installing a multi million dollar solar system the end… Read more »

Utilizing local structures to support solar-photovoltaic installations is a very good idea and many places around the World are adapting that model. There is of course, the ongoing counter-renewable energy campaign by the Fossil Fuel Industry that will present some sort of reason not to. That reason will likely sound… Read more »

Ken, the price of photovoltaic has fallen so much in recent years that plants like the one in four corners, which I am very familiar with, are no longer economical to build. This is a big reason why Solar Millenium AG went out of business. They abandoned plans to build… Read more »

Reality✓, I love the low hanging fruit reference, I use it often myself when admiring perspective breeding stock at truck stops and bars (SNIRK ;-). The desert is the low hanging fruit in this case. As technology progresses it is likely that solar panels will be better suited to cities… Read more »

Tim, I agree with you on the nukes. All nuke plants rely on the grid to operate safely. If f the grid goes down for longer than the nuke plant’s diesel generators can run, it will get ugly very quickly. Having done some security consuting work regarding nuke plants, the… Read more »

I dislike seeing ugly solar panel fields in remote barren areas. Why don’t they install this eye sore down in Los Angeles where it is already ugly? The main bonus is that it is cheapest to work on flat barren dirt. Perhaps it was also more difficult than anticipated to… Read more »

How often are you in that area? And have you ever seen an oil field? Or a gas fired power plant? Would the BrightSouce plant be the only thing you could see in that area that you use roads, gasoline and cars to get to? Such “Visual Pollution” arguments always… Read more »

I just adore driving through Maricopa, Taft and McKittrick. Lovely places, all.

This is the result of Inyo County trying to shake down the goose that could have laid the golden egg.

Here is a site with excellent detail of the project.

Lots of unresolved and contentious problems with this proposed project.

True that Ken, the hidden agendas and bias reports run rampant. This “entitlement” of instant gratification is one of our biggest enemys, “The society can’t make all wining bets — but placing no bets on the future guarantees no wins.” So true. . .

I often agree with your opinions; however, in this matter, I do not support any County new road involvement that would include enticing new business models along roads.

There’s a bunch of people who are crying for jobs. Theey might disagree with you.

With an ever increasing population, your position is difficult to justify. To be honest, I would like to go back to the 1960’s also. But yet, here we are….

Ken…Problem is,a lot of those people “crying for jobs” are the same people turning down jobs that don’t pay “DWP-type” wages….which,in most cases,just ain’t going to happen up here in Inyo and Mono County..to live up here,and enjoy the things we do,most of us have to sacrifice the high-paying jobs… Read more »

Try reading and quoting the whole discussion regarding the water table: “The CEC hydrologist disagreed. He said the data fit a fully confined aquifer characterization better. They believed drawdown could reach Stump Springs at 30 years, and could even be several feet of lowering. There is still enough uncertainty. As… Read more »

Is it really an “environmental argument” if you are worried that your well will run dry because a Johnny-come-lately decides to suck the water out of your aquifer based on a shabby examination of the ground water basin?

Please explain. Who did what analysis and on what do you base your classification of “shabby”?

Sigh. Scroll down the following link to the section titled “Workshops hammer out issues with water and safety” http://www.basinandrangewatch.org/HiddenHills.html This is the same link I posted earlier. Read what the hydrologist from the California Energy Commission had to say about the analysis performed by the hydrologist hired by Bright Source.… Read more »

I guess I’ll have to take your word for the “shabby” classification. I didn’t see anything that would lead me to that conclusion but I’m no hydrologist. Also: “Clay Johnson, project manager for BrightSource, said the 148 acre-feet per year of water use during operation of the solar plant would… Read more »

California and Inyo County never stood to derive much benefit from this project. Most if not all of the employees at the site would end up residing in Nevada while the construction work would all go to specialists from other regions. Any benefit to the local economy would be short… Read more »