By News Staff on June 4, 2014 in Government Agencies/Utilities 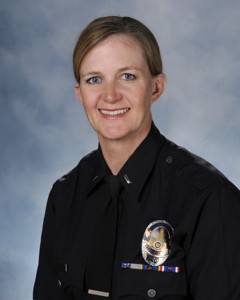 With an historic vote, Mono County elected the first female Sheriff and an experienced law enforcement officer who ran on the platform of reconnection with the people and support of Constitutional and employee rights. Ingrid Braun beat Sheriff Ralph Obenberger 1,932 to 1,085. The day after the election she said, “I am really happy with the outcome. I didn’t know which way it would go, and with such a large margin there is clearly a mandate for change.”

Citizens have questioned whether Braun can take office early. She said it is her understanding she will take office in January and that Sheriff Obenberger’s appointment is to the end of the term unless he decided to retire before that.

Until January, Sheriff-elect Braun said she will meet with County personnel who have reached out to her. She said she would stay involved, attend Supervisors’ meetings and pay attention to the Sheriff’s Office so she is ready in January. Does she know who she will select as her Undersheriff? Said Braun, “I don’t have any idea. I have a lot of contacts and know some really good people.”

To her newly won constituents, Braun said she is proud of her campaign and of the voters. She said, “I am ready for the adventure.”

She was asleep, I was the one who found her in the forest catching some zzzzz’s and called her boss. I first thought she was dead till i honked my horn.

All LEO are in the club to some extent. Time will tell.

In this case the grass would be greener with any person that actually upholds the laws, the constitution, and has morals. Presently that is not the case and that is why everyone is so happy and excited. Not only did we get someone that surpasses all of these traits. She… Read more »

Weed Wacker
Reply to  Over the Berger

Let’s not all forget Ms Braun had been fired. She was caught asleep while on duty on more than one occasion and she wrecked three Mono County vehicles. Weber will be fired and all the other dept personnel will be out to get her whenever and wherever possible. If I… Read more »

it’s funny… Everyone here is so happy and excited about all the (positive) changes that our new sheriff plans on bringing to the area, and an enthusiastic “good riddance!!” to the old Sheriff! LOL! Give me a break. It kinda reminds me of the Obama administration: lots of promises and… Read more »

If you think I’m wrong for wanting that then you can call me sheeple all day long.

Over the Berger
Reply to  Disgruntled citizen

I agree with you completely Disgruntled Citizen! What is truly scary if you think about it is these are just the things that came out to the public by a few brave soles that are willing to speak up! Can you imagine what else has a occurred that didn’t come… Read more »

Monoite
Reply to  Over the Berger

It is too bad no one ever came forward during the Paranick administration. One female employee brought up the fact that several deputies and their supervisors frequently drove home drunk from the bar in Bridgeport and they were setting a bad example for the school kids. When Paranick and the… Read more »

I know for a fact that when you get fired then get your bosses job by popular vote you’re standing on some green grass that taste real good. 😉

Ingrid will do just fine

Let’s see, Obama administration: Despite vitriolic and irrational opposition, got us through the worse of the depression without sentencing us to deflation and depression (ex. Europe); expanded healthcare to millions, even those who have pre-existing conditions; realistic foreign policy despite major upheavals in Mideast (what? no new wars); willing to… Read more »

Don… yet ANOTHER angry Republican male could possibly turn this story about the newly-elected Sheriff in Mammoth Lakes into some type of FOX NEWS political rant directed against President Obama ….two things to mention….see Major Tom’s post above mine…and then try to realize that type of nonsense your saying is… Read more »

Wayne: Yes but the GOP is losing to the teabaggers. See the story about Eric Cantor. No joke or moral here. Just a spectacle to watch.

Um— she was elected sheriff for Mono County not Mammoth Lakes. Mammoth Lakes has it own PD…just thought I would educate you.

For now, will we be a contract town soon? My guess is Mammoth’s police chief Dan Watson will be appointed undersheriff. All current officers will be absorbed by the sheriff department which would be a good move for all, especially the taxpayers. We spend a lot of money to manage… Read more »

Stick with baseball Wayne and quit embarrassing yourself. B

Disgruntled….I’d take a seasoned, veteran street-cop over some newbie academy graduate any day of the week. The young ones always have something to prove, or at least they THINK they do, and tend to be a tad bit, badge heavy. Without the “older guys” showing them the way, the young… Read more »

Don,
Kind of like every presidential administration I’ve seen. Seen one elephant in bed with an ass and you’ve seen them all.

As long as she doesn’t drive the MCS vehicles I think the county will be ok.

I hope I’m wrong. We’ll see. There are just some things about LA that I don’t want to see up here and connections to LAPD give me a shiver.

I know everyone posting here ( a very small subset of the population of Mono County) is gushing over the new sheriff elect. Having grown to adulthood entirely in LA and working there for a time, I guess I can never really trust anyone who is or was LAPD. I… Read more »

I would say that as long as the Department moral doesn’t go down and the County of Mono doesn’t have any more law suits as a result of her while she is in office…. we will be going in the right direction. I think that with her in office whether… Read more »

I absolutely agree with you about the department needing to be cleansed from the Sergeants on up. That is where the cancer starts. Luckily for us I hear some of them are already planning their exit. Hopefully she can get a clean slate by the time she takes over. Let… Read more »

You shouldn’t stereotype all former LAPD officers based on your limited experience, DT. If you look at the Eastern Sierra, we’ve had a couple of former LAPD officers who have been police chiefs, and both have good reputations. Former Bishop Chief Kathleen Sheehan left BPD a better place. Like Braun,… Read more »

There’s some truth to most stereotypes

“What we got here is … failure to communicate”

A “good old gal” results in the same abuses of authority as the good old boys.

Well said “Simple Solution, and ” Brother Officer”. When the glory days are over it’s time to quietly and honorably walk away

As a retired LEO I must say Sheriff OB has served the citizens for over 25 years in both LA County and Mono County in a profession that is not easy. This profession is hard on families and one’s soul. He leaves honorably. He was not fired and he earned… Read more »

Disagree
Reply to  A brother officer

He might have served his time, but I disagree it was honorable.

RAM
Reply to  A brother officer

This is easy. Have the board offer Obenberger, Weber and West a golden handshake. The golden handshake would be the standard, buy them one or two years of CalPers. They would be stupid not to take it. They must go for it by August 1st. It worked for getting rid… Read more »

To the gentlemen in line at the store who were overheard saying “if she wins, I’m outta here” ….buh bye now

See ya, wouldn't want to be ya
Reply to  Grrrrrr

Don’t let the door hit ya, where the good lord split ya!

If they are talking like that, they need to be gone!

“Looking at the big picture, this is whats best for MY department” Remember this one, OBIE ?Now Ingrid can say it right back to you. And thank you. If you hadn’t fired her, you’d still be Sheriff.

If I was ever fired I don’t think there would be any greater satisfaction than taking my ex boss’s job by popular vote.

Proud to call her Sheriff

Ingrid I want to say we are extremely proud of you! Thank you for choosing to make this County whole again! We need your expertise and your commitment to Mono County! We have been through the most trying of times in Mono County history, and thank goodness you stepped up… Read more »

Pedro
Reply to  Proud to call her Sheriff

Time will tell which way we are going in that tunnel.