By News Staff on May 23, 2013 in General Misc. Stories, Law Enforcement

On Sunday May 19, 2013 at 1:59am the Bishop Police Department responded to 562 N. Main Street for a male subject possibly intoxicated and attempting to gain entry into multiple occupied vehicles parked in the drive-thru line at McDonalds. When officers arrived on scene, they saw a male subject lying motionless on his back near the drive-thru. Officers checked the male subject on the ground and immediately requested Symons Ambulance to respond to the scene to attend to the male subject. 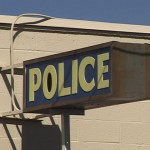 Officers contacted many witnesses at McDonalds and were able to determine the unknown unconscious male on the ground was attempting to get into many vehicles in the drive-thru line. It is unclear why the victim was attempting to gain access into the vehicles. According to witnesses, the victim got involved with an argument with two other males in a blue sedan, and then a physical fight occurred where the victim was pushed to the ground, knocked unconscious and then kicked in the head. The two male suspects took off running west bound on East Elm from McDonalds, after the manager had called the police.

Officers obtained detailed information of the suspects from witnesses and were able to get the name of a possible suspect and responded to a known residence. Officers made contact with Eric Carl Brooks and arrested him for battery with great bodily harm and violation of misdemeanor probation.

Brooks was later transported to the Inyo County Jail and is currently being held on $30,000.00 bail. The other male subject involved is not being charged with anything at this time.

The victim is currently at Loma Linda Hospital with major injuries, no further information will be provided at this time regarding the victim.

On the evening of Saturday, May 18, 2013, at approximately 8:00pm, Mono County Sheriff’s Dispatch received a call regarding an overdue hiker in the Horseshoe Lake area.

A 63-year-old hiker, from Merced, CA, was reported overdue by his son when he didn’t return after a 3-4 hour hike. The Mono County Sheriff’s Search and Rescue (SAR) team was called out to aid in the search for the missing hiker. The search continued all night with no sighting for the hiker. On the morning of Sunday, May 19, 2013, the Mono County SAR team received additional search assistance from a CHP H40 helicopter out of Fresno, the Inyo County Search and Rescue team, and canine teams from Truckee and Clovis.

The hiker originally hiked out of the Horseshoe Lake area, over Mammoth Pass, down through Red’s Meadow and then left the trail to find an “all downhill trail or passage” that he figured would put him out on 395 somewhere around Bishop. He did not make it out of the Red’s Meadow area before nightfall. He spent a cold night out before some hikers spotted him the next morning, knew the search was going on, and informed the hiker that search efforts were currently in progress for him. The hikers were able to get in touch with the SAR team and take the hiker to a nearby trailhead out of Red’s Meadow where Mono County Sheriff’s SAR team members met the hiker and reunited him with his son.

We work to provide daily news to all of the Eastern Sierra, in the tradition of Eastern Sierra News Service and the Sierra Wave. We bring you daily happenings, local politics, crime, government dealings and fun stuff. Please contact us.
View all posts by News Staff →
Ride, read, shop and swim!
OVC Leaves OV Planning Committee
10 Comments
Newest
Oldest Most Voted
Inline Feedbacks
View all comments

i was kidding,sort of,use a drone to shoot the morons who beat the crap out of the drunk

The Bishop incident could be worse…..it could be one of the victims that was having their car broken into sitting in the Loma Linda Hospital with serious injuries…You gotta think,if your going to attempt a vehicle break-in,someone (maybe the OWNER of the vehicle) might take exception to your doing it…..and… Read more »

Wayne…once the guy was knocked to the ground, UNCONSCIOUS, the fight was over. The kick to the head was the coup de grace, and THAT kick will probably (or should) get these guys locked up for a few years. Without the final blow to the head while the guy was… Read more »

Big Rick..I agree with you….but usually not how your thinking if you catch someone breaking into your car,or your home,or whatever it might be….but my guess is,in a court of law,if they have a good lawyer to defend them,they can always say the guy was being aggressive right up to… Read more »

Big Rick….Just now read this intoxicated guy was trying to break into OCCUPIED vehicles….now there is a whole different can of worms if that is the case….Don’t know how the law reads in California,but in some states,that can be seen as an attempted car-jacking…or kind of like trying to gain… Read more »

Well, it looks like at least one of the two guys who beat the drunk has a criminal record. He was arrested in part for violation of his probation. If he did nothing wrong in confronting the drunk, ask why he ran? No one in any of the other cars… Read more »

The kick to the head while unconscious was criminal.

I guess he picked the wrong car.
Some of us need to learn the hard way I guess.

Prayers to the family’s affected. That’s just crazy ferny, I don’t know how serious you are but I am gonna ride the coat tails of your comment since you mentioned President Obama. I am gonna talk about the Drone activity that he was mentioning in his speech yesterday regarding civilian… Read more »